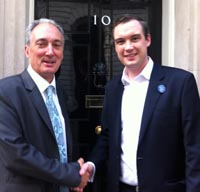 Both local Conservative MPs, Simon Kirby, MP for Kemptown & Peacehaven and Mike Weathereley, MP for Hove & Portslade voted in support of James Wharton’s Private Members Bill last week which seeks to legislate for an in-out referendum from the European Union by 2017. The Bill was passed by 304 vote to 0 at the Second Reading stage due to the overwhelming support of Conservative MPs.

Currently, only the Conservative Party is committed to a referendum. Most Lib Dem and Labour MP’s did not attend the debate and their support will be needed for the bill to proceed.

“The EU has drastically changed, yet it’s been nearly 40 years since the British people have had a say on our relationship with Europe. We need a new settlement and the people should then have their say on a renegotiation in an in/out referendum before the end of 2017. I have heard from nearly 2000 residents that want a referendum, which is why I am proud to be a Member of the only major party offering this choice.”

“I voted for James Wharton’s Bill because I strongly believe that my constituents in Brighton Kemptown and Peacehaven deserve to have their say on our membership of the European Union.

“The EU has changed dramatically since the last referendum of 1975, and given the challenges faced by the Eurozone we are likely to see further significant change in the coming years. For this process to continue without consulting the British people is unacceptable.

“That is why my party stood up for the principles of democracy and united behind this referendum Bill. Labour and the Liberal Democrats are running scared from this issue, and it is clear that the Conservatives are the only party that will give my constituents a say on Europe.”

For more information on the EU Referendum Bill, CLICK HERE: