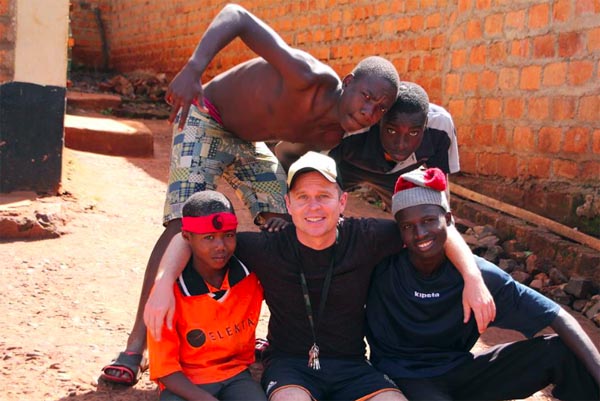 Photographer returns home to Brighton to share the sense of community he found in the most unlikely of places.

LOCAL photographer Chris Dade has been taking trips for several years in search of community. While in Kenya he stumbled across what he had been searching for, a safe house for street children who have turned their gang life into a community based on brotherhood. So taken by the community, he ends up becoming a parent for all 74 children.

The Umoja photography exhibition, is part of the Brighton Photo Fringe which runs throughout October.

The exhibition is a platform for the voices of the often invisible street children around the world who are ever-increasing in numbers. It is a unique account of their lives using images by award winning photographer Chris Dade and words by the street children produced at workshops run by Chris.

All profits from the exhibition will go to the local charity Harambee for Kenya which helps street children to start a new life.

For many year Chris worked locally as an advocate helping children who run away from home and children in care, to have their voices heard in order to change their lives.

When the project closed several years ago he left the country disillusion and in search of community. Returning back to his career as a photographer he documented his journeys which included living in very unique places such as a rain forest community in Brazil, an ashram in India, a Masai Tribe in Africa and Buddhist temples in the Himalayas.

Chris says: “The NHS had produced a paper describing a loneliness epidemic in the UK which I recognised, so I decided to leave the UK in search of a new way of living.”

Yet where he found this sense of community was in the most unlikely of places. While in Kenya he volunteered to do a photo documentary for an East Sussex based charity Harambee for Kenya who run safe house for street children.

Chris says: “I was only meant to be there for a week or two but ended up staying for 6 weeks and finding a new family.” He now visits regularly and has been asked to become a volunteer director of the charity which he has agreed – this means he is now legally responsible for 74 children.

“It was a bit of a shock going from having no children to 74,” he continues: ”The exhibition is relevant to many of us, as I feel we all are longing for a sense of community. What fascinates me is that the children have turned the negative gang culture into a positive community where everyone works together, cooks together, supports each other through breaking glue addiction and accessing education. As one of the children writes in the exhibition, without love life is impossible, and I agree. The children have taught me a lot about Umoja, which is the Swahili work for unity. We can all learn from this unique and very special way of life.”

There will be a preview evening at St Augustine’s Centre, Stanford Avenue, Brighton, BN1 6EA with live African music on Thursday, October 4 from 7-9pm and a free film show and talk on Sunday, October 7 at 3pm. For more information, click here: