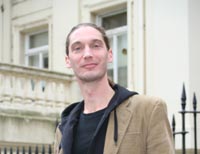 Mr Clothier has been ordered to stand trial at Southwark Crown Court where he will appear on May 31.

An application for bail was refused and he remains on remand while awaiting trial.