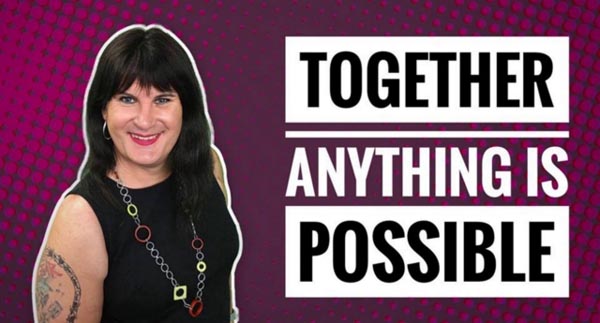 Following the Government’s decision to call a snap general election on June 8, trans broadcaster, Sophie Cook, head of Latest LGBT+TV has announced her intention to put her name forward to Labour’s NEC to be their candidate for Brighton Kemptown & Peacehaven.

Trans campaigner Sophie is a former RAF engineer, motorbike racer, newspaper editor, football and rock photographer and the first transgender newscaster on European terrestrial TV for Brighton’s Latest TV, where she hosts Beyond The Rainbow, a weekly LGBT+ news and chat show.

Sophie is the first trans woman to work in the Premier League as club photographer for AFC Bournemouth, and is an ambassador for Kick It Out and patron of Just A Ball Game? She has appeared as a motivational speaker at both Wembley Stadium and the TUC and is a Hate Crime ambassador for Sussex Police, speaks regularly at conferences about LGBT+ issues and consults with a number of major companies about inclusion and diversity.

“Over the past two years since I came out as transgender I have been on the most amazing journey which has led me to this point.

“It is time for a united Labour Party to work together to defeat the Tories and work for the good of all, regardless of their position in society.”

An ex-newspaper editor and broadcaster, Sophie believes her experience as an inspirational and motivational speaker gives her the skills and belief to serve the Labour Party and constituency well.

From her days in the Royal Air Force during the 1980s she says she always knew she wanted to stand for Parliament but was unable to pursue her dreams for fear of being outed as transgender. This is no longer an issue for her.

She continued: “I believe strongly in the values of equality and diversity, allowing everyone to thrive regardless of gender, sexuality, gender identity, race, religion, disability or wealth.

“At AFC Bournemouth, the Premier League club for whom I am the photographer, we have a motto: Together anything is possible. When I came out to them as trans it was true for us and it can be true for the Labour Party.”

The seat is presently held by Government Treasury Minister, Simon Kirby MP who will be defending a 690 majority.

Mr Kirby has announced his intention to stand again: “I can confirm that, following confirmation of re-selection by my local Association, I will be proud to stand again as Parliamentary candidate for Brighton Kemptown & Peacehaven. I will continue to do my best to support our Prime Minister, Theresa May and be a loud voice locally and in Parliament for local residents.

“We need this election now to secure the strong and stable leadership the country needs to see us through Brexit and beyond.

“The choice is between strong and stable leadership in the national interest with Theresa May and the Conservatives or a weak and unstable coalition government led by Jeremy Corbyn. An election now will give the country stability and certainty for a full five years, not just up to the point at which we leave the European Union but beyond it too.”