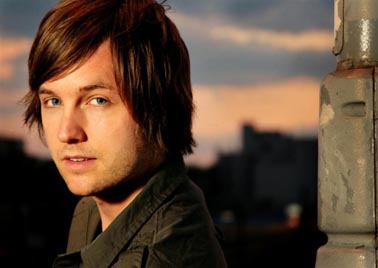 Brighton born singer/songwriter Nick Howard, is currently in the news in Germany having made the final of  The Voice of Germany, Germany’s version of The Voice this evening singing one of his own compositions Unbreakable.

Nick moved to New York six years ago with his guitar, suitcase and a lot of ambition. He has become something of a celebrity in Germany having, last Friday won through to the semi finals of the show and will now be doing the post show tour of major German venues (including the O2 in Berlin) over Christmas and the New Year.

To achieve his dream,  Nick spent four years balancing day jobs (think the Office) and night jobs (think worst waiter in New York) and squeezed in shows, writing and recording when and wherever possible.

“I remember my first show in New York was at a venue even Google couldn’t find…confirmed by the three people in attendance. Fortunately things got better.”

He managed to break free in late 2009 armed with his debut album Something To Talk About, songs from which were featured in dozens of TV shows and films and received airplay across radio networks in the US and in Germany. Since then, Nick has toured all over the world, playing 150 shows last year, has seen his songs break into the charts and has supported artists such as Lifehouse, Boyce Avenue, Gavin DeGraw, Counting Crows and Jack Johnson.

“Hearing my song on the radio for the first time was amazing…watching Snooki and the Situation make out with my song playing in the background on Jersey Shore was even better.”

Nick’s newest album, When The Lights Go Up includes several tracks produced by Marshall Altman (Natasha Bedingfield, Matt Nathanson) and was recorded in LA and Nashville. The first singles from the album have broken into radio charts worldwide and MTV recently played the video for Falling For You for the first time. To support the release of his new album, Nick supported Lifehouse, Boyce Avenue, Tyler Ward and Sunrise Avenue, playing sold out shows to tens of thousands of new fans and he embarked on several headlining tours of his own in 2011 and 2012.

He was recently the recipient of an ASCAP songwriting award for Days Like These, a single off the new album.

Nick has enjoyed particular success in Germany and it’s neighboring countries and has a special connection with his German fans who were some of the first to really support his music and come out to see him live on tours of his own. As a result he has spent the last two years pond-hopping from New York to Europe, touring his second home about ten times and picking up thousands of new fans in the process. This also led him to audition for The Voice of Germany, for which he had to learn to speak German in only four months.

Described as “honest, emotional, thoughtful, melodic and catchy” by some and “music that will enter one ear with ease, but will have trouble leaving the other” by others, Nick cites a wide range of musical influences and life experiences when writing and performing. He singles out The Beatles as a lifelong musical inspiration and John Mayer, Jason Mraz, The Script, Oasis and Coldplay as standards in his Top 25 most played  iTunes playlist.

Nick’s music has been featured on Pretty Little Liars, Switched At Birth, The Hills, Jersey Shore, Next, True Life, Cougar Town, 90210, LA Ink, Greek, Army Wives and many other TV shows and films. He has performed multiple times on live television in the US and Europe, including appearances on NBC, Fox and the BBC. When The Lights Go Up was released worldwide in 2011. All four singles from the album broke into the Top 50 radio airplay charts in Germany.

Nick will possibly duet with either Robbie Williams or Leona Lewis who are two of the four superstars who will be singing with the four finalists next week.