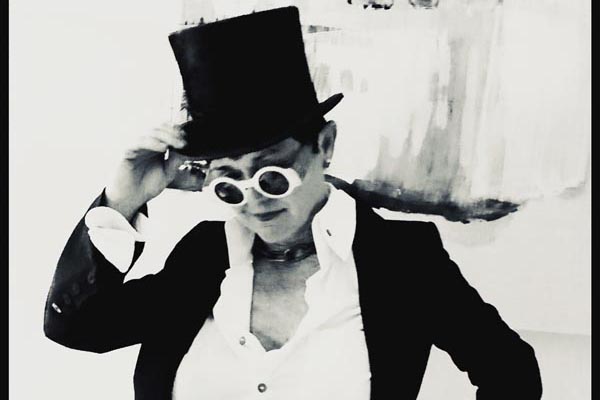 LAST year Lez donated a painting of George Michael which was auctioned at Hibernation, the community luncheon organised by Bear-Patrol raising £3,300 for the work of the Brighton and Hove LGBT Community Safety Forum.

This year Lez has kindly offered to create a unique painting of Freddie Mercury to auction for the benefit of the Rainbow Fund.

Lez said: “Occasionally I’m stopped in my tracks by a flash of genius. I’m intrigued by super bright stars, and Freddie Mercury was definitely both a genius and a star. In 2017, I painted a portrait of George Michael, another bright star, in my estimation to be auctioned at Hibernation, Bear-Patrol’s Annual Community Luncheon. I was overwhelmed by the enthusiasm and interest, and the incredibly well organised and entertaining event.”

When Lez arrived at the Old Ship Hotel for the luncheon last year she was massively stressed, as she’d very nearly destroyed the painting of George, minutes before catching the taxi to the hotel.

She continued: “When I paint a portrait of someone, famous or otherwise, I immerse myself into their character, and try my best to get under their skin. Freddie Mercury was outrageous, flamboyant and exotic. His energy and imagination had no boundaries. He had a twinkle in his eye and a ‘campness’ that transcended other rock stars, excluding Bowie of course.

“Freddie was fun, cheeky, sexy as well as being a musical genius, or as he famously described himself, ‘I’m just a musical prostitute my dear.’

Lez has chosen to depict Freddie in this years painting, as an outrageous showman with a wicked sense of humour, blessed with the ability to transform himself into a surreal visual feast.

She adds: “I’m Going Slightly Mad was released after Freddie was diagnosed with HIV in 1991.
He chose to film the music video in black and white, reminiscent of early silent movies. Wearing heavy white face make-up and a wig, he manages to amuse and titillate with such aplomb.

“I hope this painting of Freddie is as well received as George was last year and hope he manages to raise a fair amount of money for The Rainbow Fund, an organisation close to my heart.

“I look forward to seeing all the Bears at Hibernation on Sunday, October 21 at the Old Ship Hotel and thank Danny Dwyer for asking me to create a piece of art for Bear-Patrol once again this year.”

The Rainbow Fund give grants to LGBT/HIV groups and organisations who deliver effective front line services to LGBT+ people in Brighton and Hove.