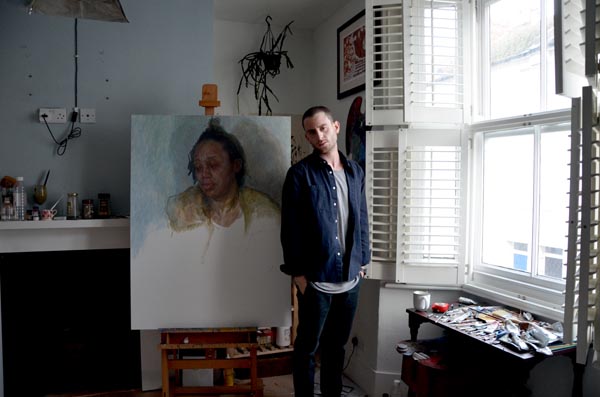 A University of Brighton graduate is among four artists shortlisted for the BP Portrait Award at London’s National Gallery, considered one of the UK’s most prestigious art competitions.

CHARLIE Schaffer said his painting has not only proved successful but it also helped him and his subject recover from depression: “It became our therapies.”

Charlie, who graduated in Fine Art Painting BA(Hons) in 2014, is no stranger to success. He previously beat a field of 2,000 to win the Lynn Painter-Stainers title Young Artist Award and he later collected the Brian Botting Prize ‘for an outstanding representation of the human figure’ three times.

This time Charlie and his co-finalists were selected from 2,538 entries from 84 countries and were chosen anonymously by a panel which included writer and presenter Gaylenbe Gould, artist Gary Hume and curator Zoé Whitley.

This year is the Award’s 40th year at the National Portrait Gallery and 30th year of sponsorship by BP.

The award has a first prize of £35,000, making it one of the largest for any global arts competition. The winner also receives, at the Gallery’s discretion, a commission worth £7,000, agreed between the National Portrait Gallery and the artist. The second prize winner receives £12,000 and a third prize winner £10,000.

Charlie said of his nomination: “At first there was a sense of disbelief, and then I felt a massive wave of relief. I had been working on this painting, primarily the fur coat, in an incredibly intense manor leading up to the deadline. It was only after receiving the acceptance email that I realised how glad I was that the hard work had paid off.

“Finding out about being shortlisted was a strange experience – we found out almost a month ago, and the prize giving isn’t for another month, so it was a bizarre mix of being excited whilst simultaneously suppressing that excitement in order to ensure I could still carry on working undistracted.”

Charlie’s entry is a portrait of his close friend, Imara in her Winter Coat. The 27-year-old, originally from London, met Imara, an English Literature student, after he moved permanently to Brighton.

He said: “What I look for in sitters is essentially honesty, or a willingness to be open. Imara immediately strikes one as having these qualities. This painting took four months, three times a week for three hours at a time, and occurred during a time in which both of us were going through quite a severe depression. This painting became both of our therapies, our saviour, our reason to get up in the morning and carry on.”

Charlie described his time at the University as “golden”. He said: “The course was a fantastic one in my eyes. You were expected to go into the studio, with no brief and to just make work, teaching you the importance of self-motivation, something that is integral to one’s future life as an artist.”