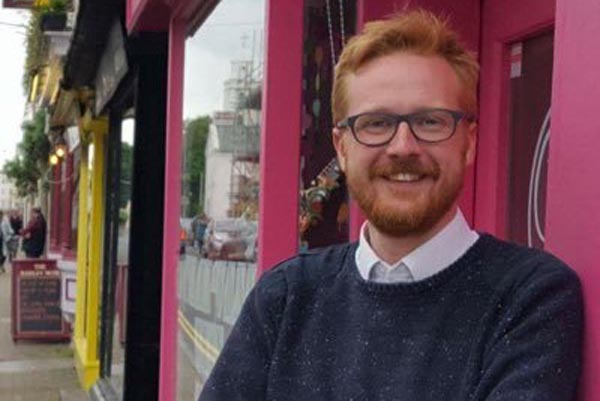 “THERE were people being far more heroic than I.” Lloyd Russell-Moyle is sitting in a constituency office in Woodingdean on a stormy Friday afternoon, dapper in thin-lapelled grey jacket, open-necked white shirt and skinny blue jeans, grey eyes flashing with passion. He’s just been for lunch on the London Road with his boyfriend of three months.

He’s also explaining why being a guest presenter at Brighton’s Golden Handbag Awards last July was the tipping point in deciding to come out as HIV-positive in the House of Commons just before World Aids Day. Simply put: even though he was the MP, publicly gay but privately positive for ten years, others were doing more.

“They were running Lunch Positive or they were running the Martin Fisher Foundation (which campaigns against HIV stigma). They were putting their lives on hold to run things and help the community and by doing that they were effectively outing themselves as positive.”

The MP for Kemptown watched as Gary Pargeter, the force behind Lunch Positive which provides a weekly meal for those who are HIV-positive, picked up the Princess Diana Award. Lloyd Russell-Moyle, positive since the age of 22, was one of many who had nominated him.

“There was that moment where I thought ‘do I say anything’ and in fact I leant over to Peter Kyle [the out gay Hove MP] and said I think I should say something, not now but I will say something in parliament” and Peter said, ‘That would be very brave of you, Lloyd, and we would be very supportive of you’.”

Russell-Moyle’s finely wrought, intensely moving speech drew support across the House and across the country, even if not everyone was supportive. “You had a few people calling up the office saying ‘Why didn’t he just use a condom’, ‘Why is he wasting all this money’, ‘Why is he bleating on about it’, those kinds of words. As an MP you always get that, you expect a bit of that.”

If that sounds a little blasé, a certain toughness came, perforce, early. “When I was young, people didn’t drive past saying ‘you fucking queer’, but they did shout out ‘you fucking ginger’. When I first stood for council in Whitehawk, someone in all seriousness came up to me and said ‘They won’t have any problem with you being gay, Lloyd, but you should think of changing your hair colour because they will have a problem electing a ginger’.”

You might say the ginger hair and neat beard are now a trademark. Plainly they appeal to his new-ish boyfriend – they met last August on the beach after an initial encounter via a dating app – who found out about his House of Commons speech on social media.

“I hadn’t really told him I was a Member of Parliament. Well I had. I told him but, I told him I worked in parliament, I worked in politics. I came down (to Brighton) on the Friday, and he said ‘I saw on Facebook what you did. Thank you. It was beautiful’. And we haven’t spoken about it since. That was it.”

The MP may have kept his exact job and that speech under wraps, but certainly not his status. They’re both HIV-positive, so that’s not an issue. Indeed the MP wonders now, another grin forming above the beard, whether he was also being a bit selfish when he spoke out.

“If you’ve met” – he’s talking pre-relationship – “someone for a couple of drinks in a pub, you happen to be dancing, you’re getting closer and closer and you finish the night by kissing … at what moment do you say (you’re positive)? It is incredibly difficult.

“So there was an element of selfishness, that I thought, well, if I get it out publicly enough I can reduce the amount of awkward situations that there are out there.” That impish smile plays about his lips again. Lloyd Russell-Moyle is adept at simultaneously being entirely serious, while being just a little playful as well.

Playfulness in public is still an issue in his relationship. “He doesn’t like it in places that he thinks aren’t really gay. So if we’re in St James’s, if we’re in Charles Street or Legends, he’s fine.” But at lunch earlier “in some random cafe” on the London Road, “he was like, ‘let’s just hug, not kiss’ as we were saying goodbye.”

“I don’t give a flying hoot about what people think, and if they don’t like it, it makes me want to do it even more.” He laughs. “The spitefulness in me! ‘What is it that you didn’t like me doing again?’”

That doesn’t mean to say there’s not been unpleasantness – outside Brighton, he’s swift to say. “Walking around in London holding hands, people saying things, shouting things, ‘disgusting!’, things like this, people bashing into us. When the whole street is empty and they come along and bash into you, you know (why) they’ve done it. Nothing that one would report.”

When do you report homophobia? A Brighton flatmate who suffered a lesbo-phobic physical attack refused to go to the police. “I begged her to report that and she said, ‘It’s not worth the hassle, I don’t want that. It’s not worth reporting these things because nothing gets done. And how will it help me?’ ”

The question plainly haunts him. Tackling rising rates of LGBT+ hate crime is, Russell-Moyle suggests, a complex one, particularly at a time of continuing police cuts. “It’s not just LGBT+ police officers, it’s police officers based in communities who know the different elements of the communities. Having a police officer around St James’s Street for example that knows the area, knows the people. A lot of these things can be resolved with a bit of mediation, just getting in there early.”

His practical emollience extends to the recent controversy about the Pride Village Party and its noisy location on St James’s Street. “Maybe because it’s such a small number of people who don’t like it – and we are talking about a small number of people, maybe ten or twenty – I think that there’s maybe an argument that we all club together and maybe pay for a weekend away (for them).” That mischievous grin resurfaces. Serious? Not serious?

There’s more, much more, over our hour together. On PreEP, “It should just be universal, available for everyone. Anyone who wants it should be able to get it.” On grabbing the ceremonial mace in Parliament: “It’s a 200-year-old piece of gold, and you think if I break it, then this is my house!”

And, inevitably, given perhaps it’s where he met his boyfriend, the beach, and how it typifies the Brighton this most unconventional of MPs loves.

“When you’re on the beach in the summer and you’ve got a Sikh family one side of you with their barbecue, you’ve got a Muslim family with a woman who’s got the whole burka the next side of you and then two families down you’re in the nude beach and you’ve got a load of men prancing around: that’s Brighton isn’t it? A mixture of absolutely everything, from the under-dressed to the over-dressed. That, I think, is beautiful.”

Whatever your political views, it’s hard not to be impressed by this young politician, surprisingly tall as he ambles off to a few emails and his next appointment. Kemp Town’s dancing, swearing MP is positive in so many more ways than just the obvious one.

Lloyd Russell-Moyle is the MP for Brighton Kemptown and Peacehaven.