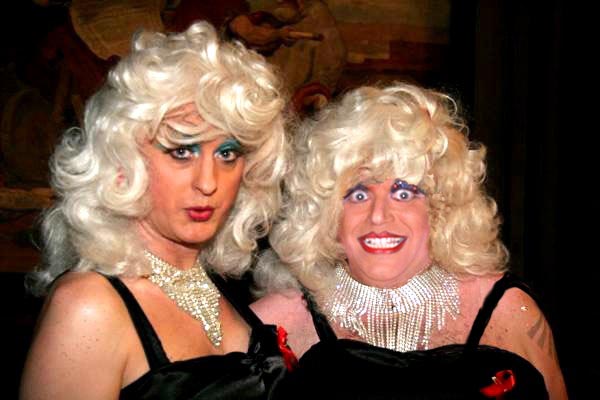 A popular drag duo from Manchester in the Noughties is reforming for a charity show in Brighton.

Who exactly is this Dolly Tub, I hear you ask?

Most of you will know him as Philip, the manager of Nice ‘n’ Naughty on St James Street, where he has been behind the counter for nearly 5 years, only letting Dolly escape during Pride weekends.

Philip explains, why now are the Lilletts performing: “I have been thinking about letting Dolly loose on the Brighton public for some time, and having chatted with my drag partner a few months ago, we decided to reform and have a night of fun. The last time we performed together was for a charity night in Manchester, organised by the Nice ‘n’ Naughty team up north, so it’s great to have the support of Nice ‘n’ Naughty for this one too, and giving support to a local charity in the process”

The show, which lasts about 1 hour, consisting of some classic drag divas, promises to be fun. If you ever experienced the Lillettes when they were regulars at The Hollywood Showbar and Via in Manchester, you know that you will be experiencing old school drag, with Lip Syncing at its best!

Philip explains: “We both love performing, and for us it is all about making the audience smile, and having a little giggle at ourselves in the process! Along with the show, we will be having a raffle to raise more funds and as it’s my Birthday, a few drinks afterwards.”

The charity that the girls have chosen is the locally based Martlets Hospice, which plays a vital role in helping people to live life as fully as they can, right up until the end. Through expert clinical care provided by highly skilled and experienced doctors and nurses, they ensure that wherever possible peace, respect and dignity is retained – it is a very simple and very human ethos.

The event will be held at Latest Music Bar, Manchester Street, on February, 18, 2016. Doors at 8pm, the show at 8:30pm, with all proceeds from donations on the door and raffle going to the Martlets charity.