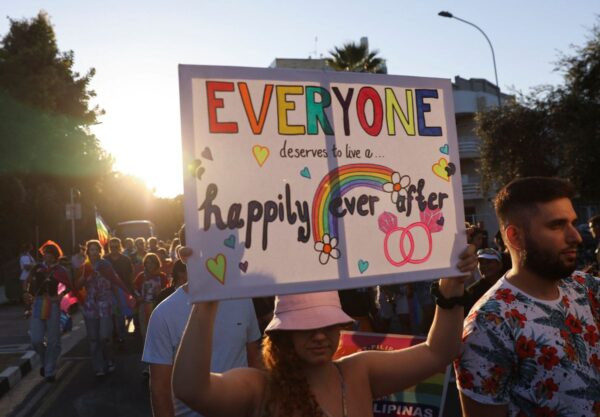 Hundreds of LGBTQ+ activists turned to the streets of the Cypriot capital on Sunday, September 25 to push for equal rights irrespective of sexual orientation.

Marriage For All was the slogan of the Pride Parade through Cyprus’s capital Nicosia, using the Cypriot vernacular ‘Gamos Gia Oullous’ to emphasise how local mentalities morphed policies.

Marriage of same-sex couples is not permitted in Cyprus, while same-sex civil partnerships with a limited set of rights are legal.

Activists say a lack of a family law framework for same-sex couples deprives them from the right to adopt children, or give equal parental rights to a couple in a same-sex civil partnership.

Antonis Papageorgiou, vice-president of Accept-LGBTI, the organisers of Sunday’s parade, said: “It’s virtually no-where, no discussion (at an official level) has started.”

Other concerns included legal gender change recognition on state documents, which has been pending since 2015. It was only recently approved by the island’s cabinet and has now been sent to parliament.

Stefi Drakou, Cyprus’s justice minister, said the state recognised more needed to be done to end all forms of discrimination based on sexual orientation and gender identity. “Our duty is to build an open and inclusive society,” she said in a speech.

Papageorgiou said the slow pace of reforms had seen Cyprus lag behind other countries.

“We simply cannot wait years for pieces of legislation to pass.”