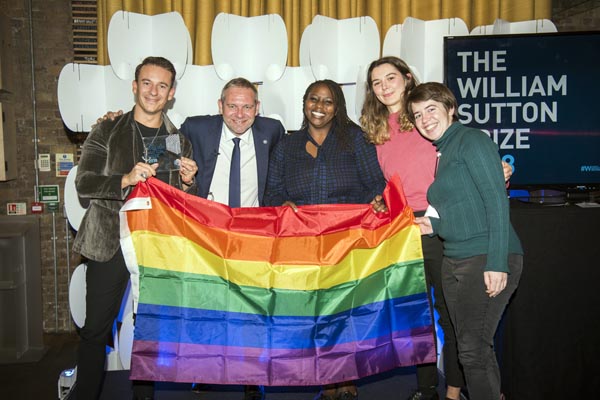 THE winners of the first William Sutton Prize were announced at an awards ceremony in London on Thursday, November 22.

The prize was launched earlier this year by Clarion Housing Group as a tribute to the legacy of William Sutton (the Victorian entrepreneur who left his entire estate to fund homes for the poor of London) and as a means to promote innovation for public good.

MRI were crowned winners of the prize for Social Entrepreneurship and Innovation, for their proposal to expand the number of safe homes available to vulnerable LGBT+ asylum seekers and refugees. The prize for Excellence in Social Housing Design and Placemaking went to the VeloCity team for their visionary designs for the future of villages.

Micro Rainbow International provides safe housing for LGBT+ asylum seekers and refugees in the UK and a suite of support services that include employment and social inclusion.

The first safe homes were opened in October 2017 and the organisation now has five properties, which can support up to 40 refugees. By 2021, they plan to manage 40 properties across the country and house 320 refugees a year.

Micro Rainbow International will receive a £20,000 prize to further develop their project from Clarion Futures, the charitable foundation of Clarion Housing Group.

Clare Miller, Group Chief Executive of Clarion Housing Group said: “I am thrilled that we will be supporting Micro Rainbow and the VeloCity team through the William Sutton Prize. Our winners are inspiring and innovative projects that have the potential to change thousands of lives. To have more than eighty applications in the inaugural year of the William Sutton Prize is very humbling. We have been blown away by the quality of and diversity of the applications from across the country.”

Sebastian Rocca from Micro Rainbow International added: “We are delighted that our project was chosen, amongst so many worthy causes.  The financial prize will enable Micro Rainbow International to reach out to more LGBTI asylum seekers who are homeless and face violence. In times when feelings of hate and division seem to be more popular than those of love and solidarity, this prize sends a clear message: we are not alone in our fight for equality. We need more companies like Clarion Housing Group who take pride in standing for community values and human rights.”