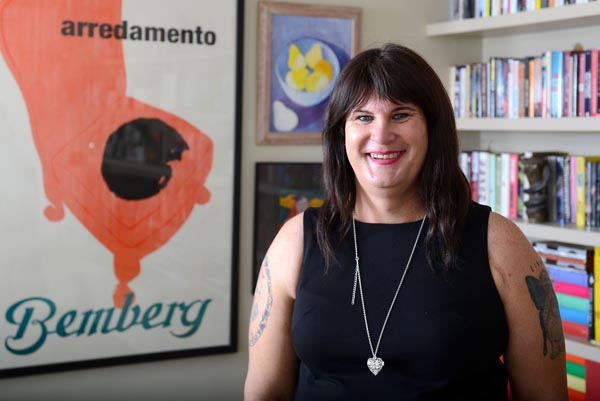 Latest TV, the UK-based TV channel continue their equalities and diversity mission with the creation of the UK’s first ever LGBT+ TV terrestrial channel!

Broadcasting from February 2017, Latest LGBT+ TV will bring the best in LGBT+ news and entertainment to viewers’ TV screens on Freeview Channel 7 and Virgin Media 159 in the Greater Brighton area, as well as online globally.

Fronting the channel will be two well-known faces on the local LGBT scene.

Presenter and Head of Latest LGBT+ TV, Sophie Cook joined Latest TV in 2016 becoming the first ever transgender woman to front a news programme in Europe. The former RAF engineer, motorbike racer, newspaper editor and rock photographer, was also the first trans woman to work in the Premier League as club photographer for AFC Bournemouth.

Her news and chat show Beyond the Rainbow will become a weekly highlight of the LGBT+ schedule and in addition she will be creating new documentary programmes for the channel.

Sophie said: “I’m incredibly thrilled about the prospect of leading one of the most exciting developments in British television for decades.

“The world is changing, and not always for the better, throughout the world there is an increasing wave of bigotry and prejudice. This represents a very real possibility to combat that and change people’s lives. We’re aiming to entertain, educate and inspire our viewers.”

Andrew Kay, the presenter of Amazon Prime’s International Chef Exchange will bring his wit, charm and soufflé to the channel.  Andrew has worked in the creative world since graduating from Chelsea School of Art. For sixteen years he was an art director in the world of hard back books, designing innumerable book covers for some of the worlds best known and best-selling authors. After that he worked in theatre as a designer before joining Brighton’s magazine The Punter which went on to become The Latest Media group. Since the launch of Latest TV he has made several successful programmes and become a regular reporter on Latest TV News. On Latest LGBT+ Andrew will be presenting news, current affairs programmes and will also be fronting his own chat show AK Soufflè with guests from Brighton’s LGBT+ communities and beyond, with writers, musicians and people from the world of theatre talking about their lives and their careers.

Andrew said: “I see this as my chance to enjoy, in a public arena, being gay – but also in working towards a better and more equal world. Working with the Latest LGBT+ TV team is going to be exciting, challenging and fun and I hope that people –  whether they are LGBT+ or not – will join in.”

Bill Smith, Latest TV’s CEO and a nominee for the National Diversity Awards, said: “We’re delighted that our channel will be creating daily LGBT+ news programmes and entertainment shows, as well as screening the very best LGBT+ films from across the world. We’ll also provide a platform for LGBT+ filmmakers to share their work. With support from Coast to Capital, Latest TV has launched LGBT+ TV.  However we receive no ongoing public funding and so we’ve turned to crowdfunding to finance our service.”

Sophie Cook, added: “People power can change the world from the ground up and help to combat prejudice and injustice wherever it may appear. Together we can be the change that we want to see in the world, we’re giving people pride not prejudice.”