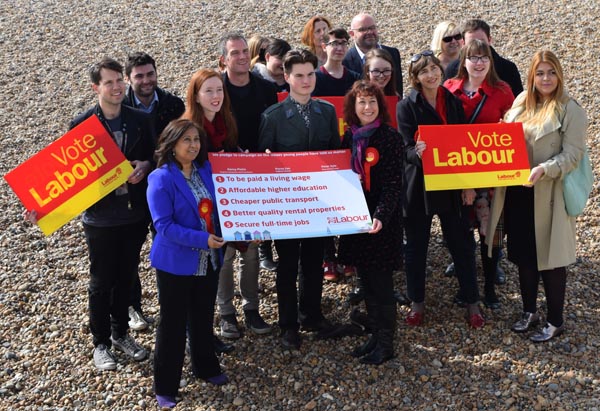 New research has identified the key election issues for hundreds of young people in Brighton, Hove and Peacehaven leading to the three local Labour parliamentary candidates launching their ‘youth pledge’ on Brighton’s seafront this week.

WHILE creating more affordable higher education was the number one concern raised by young people, others included a much broader range of subjects – shared with the wider population.

The creation of more apprenticeships and training opportunities as well as dealing with climate change also featured prominently in the priorities of young voters.

Nancy Platts, Labour’s candidate in Brighton Kemptown and Peacehaven, said: “Making higher education more affordable and continuing to campaign for a living wage is absolutely vital to ensure we have an economic recovery that works for the many, not just the millionaires David Cameron has given a tax cut to.

“I also want to see fare caps to ensure cheaper public transport and if elected I will be voting for better quality rental properties with predictable rents and a ban on rip-off letting agents fees.

Peter Kyle, Labour’s candidate for Hove and Portslade, added: “Having greater ambition for the next generation is at the heart of Labour’s vision for our city and our pledges are a firm commitment to delivering on behalf of young people living locally”

Purna Sen, Labour’s candidate for Brighton Pavilion, concluded saying: “Throughout my campaign I’ve been impressed again and again by the really strong interest expressed by young people in all the important issues facing our city and the country. Labour felt it was important to ask young people in Brighton and Hove about their hopes and concerns. I know Labour has the policies to address these vital issues – jobs, housing, education and transport – which local young people have told us matter to them.”