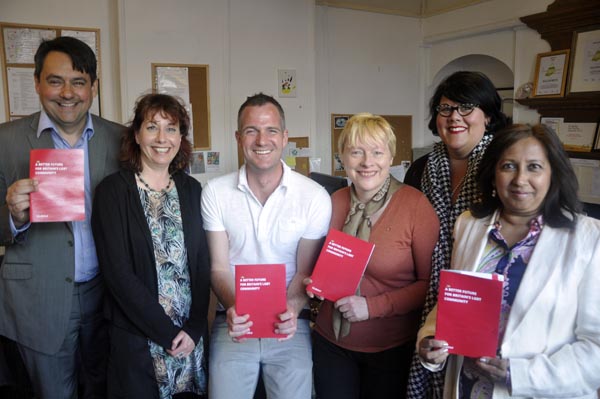 LAUNCHING Labour’s LGBT manifesto Angela Eagle, Labour’s Shadow Leader of the House of Commons highlighted statistics showing nearly a quarter of LGB young people, and half of young trans people, have attempted suicide. She pledged that Labour will prioritise access to mental health services for young people, including those bullied because of their sexuality or gender identity and ensure teachers are equipped to identify problems early and link children up with support. She said that the extraordinary progress Britain has made on lesbian and gay rights over the last 20 years remains one of Labour’s proudest achievements, but was clear there is no room for complacency.

She said: “I’m proud that over the twenty three years I’ve been in parliament Labour has helped to deliver legal equality for LGBT people, but now we face a fight to make that equality a reality for every single LGBT person in our country. Too many LGBT young people are growing up scared and alone because they are bullied at school and don’t have sufficient support when their mental health suffers. In government Labour will finish the job we started and ensure every LGBT person has the chance to achieve their ambitions free from prejudice and discrimination.”

Angela was joined by Stephen Twigg, former Shadow Secretary of State for Education, entertainer Amy Lame and the three local Labour candidates, Peter Kyle (Hove and Portslade), Purna Sen (Brighton Pavilion) and Nancy Platts at Allsorts Youth Project, where she chatted with young people from the project, prior to the main manifesto launch at the Komedia later in the evening.

The commitment forms part of a wider package of measures to tackle discrimination and promote positive representation for LGBT young people, including action on homophobic, biphobic and transphobic bullying in schools, strengthening the law on hate crime and challenging narrow and prejudiced representations of LGBT people in public life.

Tackle the discrimination that holds LGBT people back: Labour will strengthen the law on LGBT hate crime, undertake a review of gender identity law and policy and implement ‘Turings Law’ offering posthumous pardons to gay men convicted for homosexuality.

An education free from homophobia, biphobia and transphobia: With Labour, teachers will be equipped to tackle LGBT-phobic bullying, and we will introduce age-appropriate compulsory sex and relationship education in all State-supported schools so that young people learn to respect each other’s relationships.

Leadership on LGBT rights around the world: Labour will appoint the UK’s first International envoy on LGBT rights to promote respect on LGBT rights globally, and review the procedures for asylum seekers fleeing persecution for their sexuality or gender identity, to ensure the rules are upheld fairly and humanely.

Accessible and supportive health services: With Labour, people will have an equal right to mental health treatment including talking therapies and we will work with the trans community to improve access to gender care services.

Gloria de Piero, Labour’s Shadow Equalities Minister, said: “As a country we have made huge strides towards equality in law and in life for LGBT people, and it is a source of huge pride that so many of these were delivered by Labour in Government. But when so many LGBT young people still suffer discrimination and bullying we cannot be complacent.

“Labour will continue to drive forward progress with a plan to tackle homophobic bullying, strengthen the law on hate crime, improve access to mental health services for all and provide international leadership on LGBT rights.”