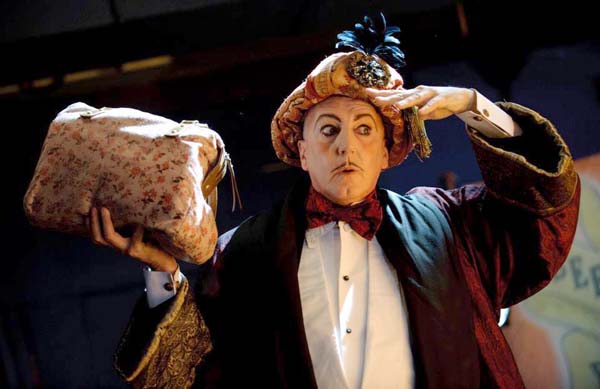 Kinny received the British Empire Medal in this year’s Queen’s Birthday Honours list, for services to the Arts, with particular reference to his extensive and devoted work, for 35 years, within the Deaf and disabled arts communities.

In 2014 he received the BBC Community Hero Award for services to The Arts and in 2025 the prestigious Government ‘British Citizens Award (Arts)’.

The Krazy Kat Theatre Company, based in Brighton has a vivid style, combining  theatre and Sign Language Arts which promotes access to the arts for the deaf community, and champions the value of signing to the hearing.

Kinny’s unique vision has led to a distinctive, ambitious and high quality style of integrated Sign Language Arts, and over the 35 years of Krazy Kat’s existence has attracted artists to the company who seek to reflect the lived experience of deaf and hard of hearing children and young people.

Kinny studied Classical Ballet, graduating in 1976. He featured in London’s West End in The Rocky Horror Show and Chicago, and in rep. and endless world tours.  He is still a guest artist with the outrageous Lindsay Kemp and his company and escapes with them when he can fit it into his busy Kat schedule.

Kinny is a Development Adviser to BBC Cbeebies, working on new mainstream Sign Language television projects for children. In 2014 he received the BBC Community Hero Award for services to The Arts and in 2025 the prestigious Government ‘British Citizens Award (Arts)’.

The winners of NDA will be announced at the breathtakingly beautiful Anglican Cathedral in Liverpool, on September 16, 2016.

Over 20,000 nominations and votes were received this year, paying tribute to grass root communities nationwide.

Designed to highlight the country’s most inspirational and selfless people, the NDA’s are supported by the likes of Stephen Fry, Adam Hills and Sir Lenny Henry amongst many.

British Diver & Television Presenter Tom Daley applauded the awards saying: “The National Diversity Awards is a celebration of the fantastic work within Diversity, Equality & Inclusion by all positive role models and community organisations. Everybody who has been nominated and shortlisted is striving towards making society better for everyone, regardless of age, gender, race, faith, religion, sexual orientation, or disability. This is important because you are having a positive impact to people’s lives.

“I would like to wish all the shortlisted nominees the very best of luck at this year’s National Diversity Awards.” He added.

The NDA Judging Panel recently deliberated and came to a decision regarding the final shortlist.

Winners will be announced at The National Diversity Awards 2016 on September 16.

To purchase tickets for the black tie event in Liverpool Cathedral, click here: