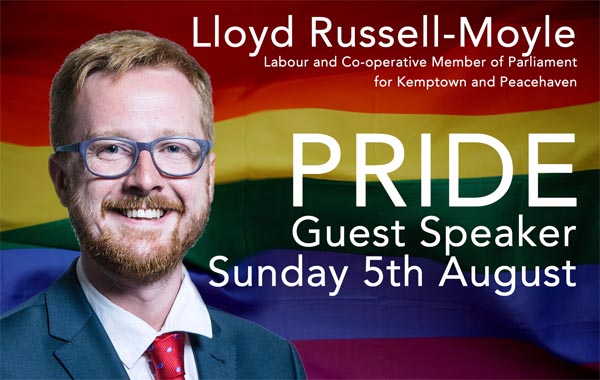 The Village Metropolitan Community Church welcomes Lloyd Russell-Moyle as the guest speaker for their Pride service on Sunday, August 5, 2018, at the Somerset Day Centre, in Kemptown at 6pm.

LLOYD was born and went to school in Brighton and Lewes where he studied Peace Studies, Conflict Resolution and International Law at the Universities of Bradford and Sussex.

He was Vice-President of the European Youth Forum in Brussels and has a background in Youth Work.
Whilst a serving local councillor in East Brighton he was elected to serve as the Labour & Co-operative MP for Brighton Kemptown and Peacehaven in June 2017.

In parliament he is a prominent member of the International Development Select Committee, he chairs the All Party Parliamentary Group on Youth Affairs and is the Parliamentary Private Secretary to the Shadow Justice Minister.

Rev. Michael Hydes, senior pastor at The Village MCC said: “I am thrilled that the honorable member of parliament for Kemptown and Peacehaven, Lloyd Russell-Moyle, will be our Pride service keynote speaker this year.

“I can’t believe it’s been over a year since the general election. However, although I was excited to see that Lloyd was one of eight LGBT community members voted into office, it was his value set that thrilled me the most.

“He is a man with a heart for equality and justice. He has publicly condemned the government’s policies on arms exports to countries such as Saudi Arabia for use in the conflict in Yemen, and supported schemes that speak to helping those on the margins. He’s a local lad, (no disrespect meant but at 32 he’s a lad compared to me) and I can’t think of anyone more qualified to talk about Pride in our community.”

The Village MCC Brighton and Hove is a church that was created by LGBT+ Christians, their families, friends, and allies called to support the LGBT+ communities in whatever ways it can. It offers a safe space where anyone can feel at home, fully affirmed in their sexuality and gender identity.

Church members are active in the larger community, offering emergency aid and support to the homeless and vulnerably housed. Their minister, Rev. Michael, offers spiritual direction and pastoral care. they worship together every Sunday at 6pm.