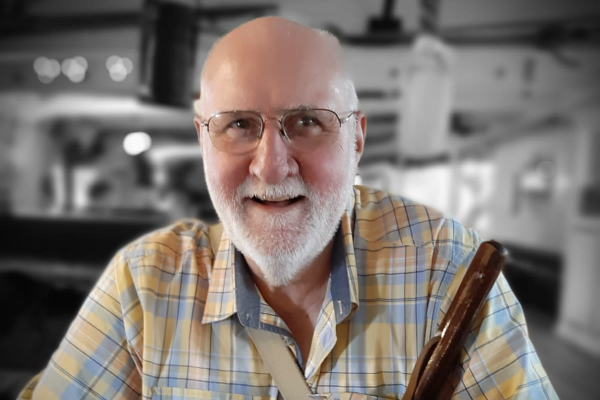 Paul Baddeley writes to Gscene about the recent loss of Keith Kerr:

“I’m sure that all of us who knew Keith have different experiences of this big man who loved colourful clothes and whom Covid has unfairly taken from us so suddenly.

I met Keith 10 or more years ago at the Regency swimming pool in the centre of Brighton. I was with friends on yet another attempt at keeping fit, and later discovered that Keith was there with his friend Wolf,  and they were the core members of the then GEMS swimming group.

Our mutual gaydar was working, we got chatting and Keith and Wolf invited us to join them for coffee afterwards at their favourite cafe nearby.

As a result, my friends and I became members of the GEMS social group, and our mutual friendships developed.

Even though GEMS  no longer exists, the swimming group is still going strong. Keith reconfigured it as a WhatsApp group and we moved on to social media. Happily it continues to be successful, both for swimming (when we are allowed back in the pool again) and as a small social group for older gay men. All the members will miss him, both as a friend and as the anchor around which the group revolved.

Keith came to Brighton in the early 1980s and, during the horrors of the AIDS virus as it cut through the gay community, he was an active member of the Brighton  Cares initiative that raised funds to help those many gay men so badly affected. He was always very proud of his involvement in this project, and made many friends during this time of his life.

Keith was a man of principle, old-fashioned in some ways, never forgot a birthday, and loved a long chat on the phone.  His ability to recall and recount the minutiae of life was a thing of legend (both his life and yours) and he would regularly max out the one-hour free call time on his landline.

It always amazed me how many people he knew, and when bumping into old friends or work colleagues around town it was very clear that he was regarded with great warmth and was genuinely liked.

Until more recent years when health slowed him down a bit and his sense of balance caused him to adopt the use of a stick, he was a great “joiner in” of things and organiser of theatre trips and restaurant outings. He loved the ‘Trocks’ comedy ballet and organised several groups to see them when they came to Brighton. Among many other things, we  were in the audience to see the John Wilson Orchestra and Pink Martini at the Dome, and as for his outfit  for The Rocky Horror Show at the Theatre Royal….. well some things are best left unsaid. LOL.

I will miss this man a great deal,