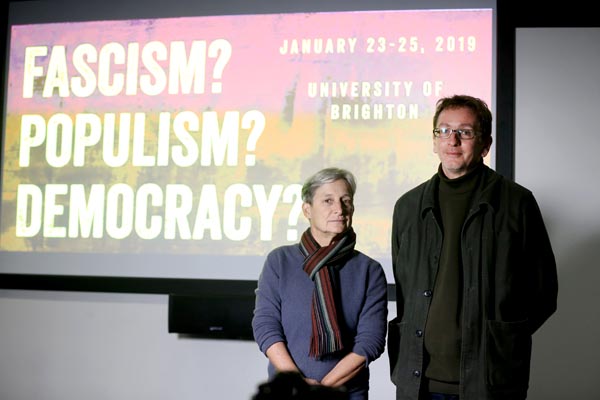 In a recent visit to the University of Brighton renowned philosopher and gender theorist Judith Butler said universities can bring about “new kinds of alliance” across the world in times of political upheaval.

IN a wide-ranging discussion at the Critical Theories in a Global Context conference, hosted by Radical Futures at the University of Brighton, Butler encouraged academics to engage with and understand contemporary social movements.

She discussed the rise of right-wing populism and discrimination against LGBT+ people in Brazil and Turkey. Speaking about the conference, attended by academics from 43 countries, and organised with the International Consortium of Critical Theory Programmes, Butler said: “A consortium like this facilitates new forms of dialogue but also new kinds of alliance and even coalition.

Butler challenged universities not just to react to social and political change as items on the curriculum, but to become active participants in a worldwide discussion for a “more just future”.

She said: “How do we engage with a variety of publics to generate knowledge not just inside the academy but outside the academy, not just responding to social movements as objects of study but bringing them into the university?

“This is an effort not to build critical theory within the academy. It’s a way of thinking about the politics of the university in the public world, and what we can do to understand what’s happening, to offer some kind of language or site for discussion so that we can put forward visions of a more radically democratic and just future.”

It was put to Butler by Mark Devenney, Academic Lead for Radical Futures, that 30 years on from her book Gender Trouble the world was still having trouble understanding gender.

Butler cited the Donald Trump administration’s ban on transgender people serving in the military as an example of a political body declaring “the sex with which you are born is your sex and people can’t make or re-make anything about that”.

Butler added that the backlash against her work on gender – and that of other gender theorists – has included her being “demonised” in the imagery and rhetoric of those who oppose her: “Those of us who work in the area have been portrayed as witches or devilish figures, and for me as a Jewish queer person it’s particularly frightening given that I’ve also been portrayed with horns. It’s playing on the demonic character of the Jew or the lesbian or the non-gender-conforming person. I have experienced that.”

Talking about the conference itself, which was funded by the International Consortium of Critical Theory, Butler said that issues about free movement raised by Brexit fed into the content of the event.

“We have UK migration politics and the looming Brexit/no-Brexit world impinging on this conference in a very real way,” she said. “Of course what happens is that all of these issues become the substance of the conference. In some sense the impediments to holding a conference – the freedom to travel and have dissenting views and critical perspectives – these are now contentious, these are very controversial.”

To find out more about the conference and watch the full Q & A with Judith Butler view: http://bit.ly/2TYuCBW

For more information on the University of Brighton’s Radical Futures programme click here: