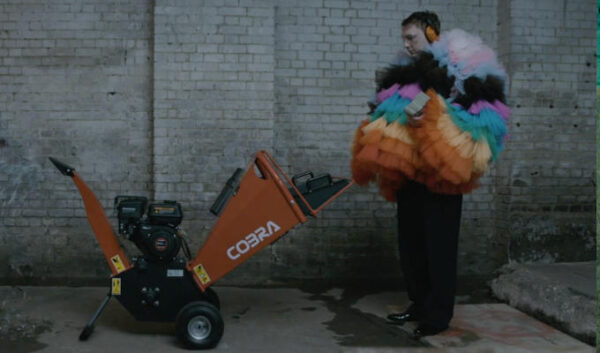 At 12pm on Sunday November 20, the day that the FIFA World Cup was due to kick off in Qatar, Joe Lycett shredded David Beckham’s reputation as an LGBTQ+ ally alongside £10,000 of his own money live on Benderslikebeckham.com, dressed in a ruffled, rainbow outfit. The comedian makes no comment in the video, but simply curtsies and steps out of shot.

A week before the World Cup was due to kick off in Qatar, comedian Joe Lycett issued an ultimatum to David Beckham, asking him to pull out of his reported £10 million contract with Qatar, or donate his fee as an ambassador, due to the country’s poor human rights record including the treatment and persecution of LGBTQ+ citizens. If Beckham ignored this plea, then Lycett threatened to shred £10,000 of his own money, instead of donating it to charity.

“A platform for progress” pic.twitter.com/EeMelv01nu

David Beckham has stayed quiet on the matter, going ahead with a speech at the ‘Generation Amazing’ youth festival in Doha, in which he said: “Dream can come true. That is why you are here. You share Generation Amazing’s twin passions for the game of football and for making the world a more tolerant and inclusive place,” seemingly ignoring Qatar’s record regarding migrant labour, human rights, and anti-LGBTQ+ laws.

When Lycett shared the video of himself shredding the money on Twitter, he simply captioned it with “A platform for progress”, a line which featured in David Beckham’s speech in Qatar.

While many people online seemed to miss the point of this stunt – suggesting that it was a waste of money – others commended him for making a powerful statement with some even suggesting that the now shredded money could be made into a piece of art by an artist like Nathan Wyburn – who is known for creating collages from unusual medium – and sold at auction for charity instead.

Joe Lycett has yet to make any statement regarding the result of this stunt; however, it is David Beckham’s silence when questioned about his relationship with the anti-LGBTQ+ country of Qatar that is truly deafening.