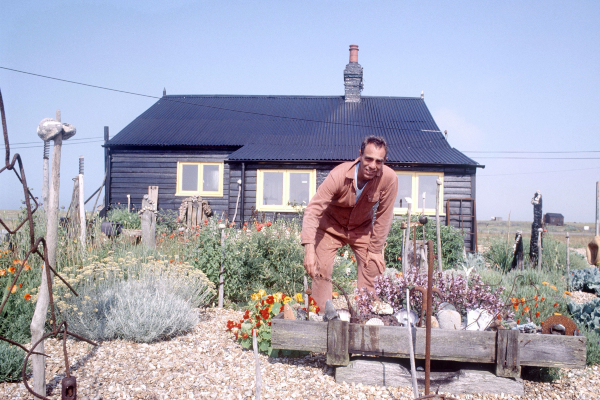 Derek Jarman’s beach front home has been saved for the nation following a £3.5m campaign. The Cottage and garden, situated on a shingle beach in Kent was once the isolated refuge of this iconic gay rights activist, artist and filmmaker.

This came about after the largest ever Arts crowd funding campaign, organised by the actor Tilda Swinton only 10 weeks ago. The actress, who was with Jarman when he first saw and fell in love with the house said: “When we first launched this appeal, we were throwing ourselves into the void in the hope and faith that others might feel, as we do, that seeds planted with love make for a resilient and sustaining garden, even one grown amongst stones.” adding “What could be a clearer indicator of our collective commitment to a rich and inspiring future than this phenomenal response?”

Campaigners maintained that Prospect Cottage, located on the bleak and windy wilds of Dungeness beach and loomed over by a nuclear power plant, is in itself a work of art. As well as financial aid from trusts and large organisations, there were nearly 7,300 public gifts of money and a “substantial personal donation” from the artist David Hockney.

Jarman was already an infamous filmmaker of such arthouse classics as ‘Sebastiane’, ‘Caravaggio’ and ‘Jubilee’. The gay rights activist bought and retreated to the Victorian fisherman’s cottage in 1986 following his HIV diagnosis, and there he lived until his death in 1994. He was survived by his constant companion Keith Collins who maintained the home until his own death in 2018.

Fellow artist Tacita Dean, a friend of Collins who procured the help of the Art Fund to save the cottage, said: “I cannot express how delighted and moved I am that so many people have come together to protect this very special place” adding that Collins had  “laid the way for this to happen enabling us all to keep Prospect Cottage as a beacon of hope in the resilience and redemption of the creative process in times of adversity. As it was for Derek, it is for us now. Thanks Keith and thank you to everyone who has made this possible.”

One part of the fundraising was Jarman’s friend Sandy Powell’s ‘autograph Suit’. At the Oscars and Baftas she garnered more than 200 famous signatures including those of Scarlett Johansson, Brad Pitt, Spike Lee, Joaquin Phoenix, Renée Zellweger and Laura Dern. It was sold at auction for £16,000.

Stephen Deuchar, who steps down this week after 10 years as director of the Art Fund, said: “Securing the future of Prospect Cottage may seem a minor thing by comparison with the global epidemic crisis which has recently enveloped all our lives” he went on to say “Derek Jarman’s final years at the cottage were an inspiring example of human optimism, creativity and fortitude battling against the ravages of illness, and in that context the success of this campaign seems all the more apposite and right for its time.”

Jarman’s archive from the cottage – notebooks, sketchbooks, letters, drawings and photographs – will be archived by Tate Britain. The campaign’s success ensures Jarman’s legacy will continue to inspire devotees and future generations for many years to come.