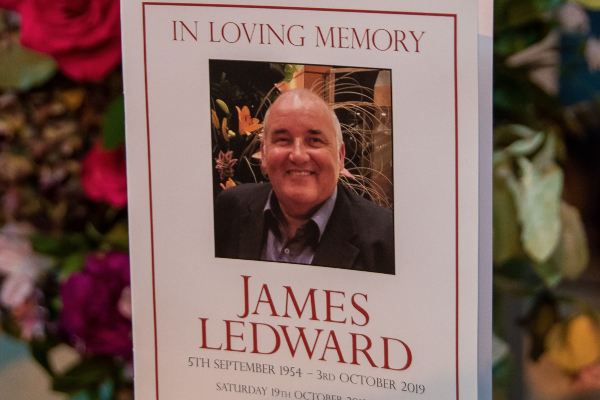 On Saturday, October 19 2019 we said goodbye to our friend, Gscene editor, and LGBTQ+ community champion.

Our editor, James Ledward, died on Thursday, October 3, after a short illness. His funeral took place at noon on Saturday, October 19 in Brighton. People lined St James’ Street as the funeral cortege went past and then slowly followed the hearse to St Mary’s Church in Kemptown for a service to celebrate James’ life. The church, and street outside, was filled with hundreds of people from the community who had come to show their final respects.

Reverend Michael Hyde, of The Village MCC, read the story of James’ journey from Liverpool to London and then Brighton, interspersed with speakers including Chris Gull, chair of the Brighton Rainbow Fund, Andrew Kaye, of Latest TV, James’ niece Emma, and many others, who rose to read poems, say some final words and remember the changes James made to their lives. David Raven (Maisie Trollette) and Jason Sutton (Miss Jason) sang Over the Rainbow and the Actually Gays Men’s Chorus and Brighton Gay Men’s Chorus joined together to sing a beautifully evocative rendition of Snow Patrol’s Run. The whole church wept while they sang. James had chosen Blake’s Jerusalem as his hymn.

Following the service, people joined James’ husband Besi and family, along with the staff at Legends, for a wake attended by hundreds of people throughout the day to share a celebration of James’ life, hosted by Stephen Richards (Lola Lasagne). One by one the city’s performers, including Maisie Trollette, Miss Jason, Gabriella Parrish, Jennie Castell, Kara Van Park, Dave Lynn, Davina Sparkle and Pat Clutcher, stood up to sing and recount their memories of James. The Rainbow Chorus sang the Rhythm of Life and Nicky Mitchell led the crowd in a tearful rendition of You’ll Never Walk Alone.

James founded Gscene in 1995 and had been the editor since its first issue. He created the magazine to be the place for campaigning and activism for the LGBTQ+ communities. During his editorship the readership grew to more than 50,000 people and the magazine is now in its 24th year.

James was never closeted. He was always out and proud. James believed in fundamental fairness and used Gscene to give voice to people without his own privilege, to platform views which were right and fair, to give space to voices not often heard on the commercial gay scene. He was a formidable adversary, with a researched journalist attitude to telling truth to power. James judged you on what you did, not on what you said. Actions not words. Outcomes not promises. He worked to ensure that the voices of LGBTQ+ people were given space to be heard and their concerns, particularly around HIV, health and diversity, were acted on. He was tireless in his commitment to the community, unstinting in his commitment to constructing an infrastructure for LGBTQ+ people, provided by LGBTQ+ groups. We live in his legacy.

From the AIDS Memorial, to the Brighton Rainbow Fund, and many many other projects, support groups and (now established) charities he promoted, nurtured and was instrumental in providing wise counsel, advice, and connecting the right people. James was a timekeeper, a grafter, a working class boy with musical talent who rose on his merit. James understood, on a fundamental level, that life is for living and challenges are an opportunity. Having studied oboe and conducting at the London College of Music, and the Royal Academy of Music, his own vocation, performing in and conducting orchestras, was thwarted by a stroke in his early 30s. He moved into music publishing. ­He was a seriously generous man, always quietly using his own privilege and contacts to promote others and encourage people to connect and build. His Liverpudlian wit could be shocking but always done with a twinkle in his eye. For a man with so many things to be proud of, James was a man of simple, humble bearing.

Everyone in this city has been affected by James in one way or another. We of the LGBTQ+ community know how much he built, how many people he connected, how many ideas he promoted or supported. He held to account, he challenged. All of us in the wider world, wherever we are on the wide spectrum of sexuality and gender identity, live our lives a little easier and fairer because of him.

This is just a small opportunity to bear witness to James. He was planning the future of Gscene before his death and the magazine will continue as it is. James knew the importance of having a strong friend at your back, someone to argue your case, a safe place to share views, a closet door to burst out of, a hefty soap box to shout loudly from about injustice, a balcony to take the laurels from, a sofa to share secrets on and a place to fiercely inform our LGBTQ+ successes. James and Gscene was all of these things, Gscene will continue to be these things.

James had already planned Nov & Dec issues, and so the January Gscene will be a commemorative issue dedicated to the life and time of James Henry Ledward, where we share his plans for taking Gscene forward. James, the man, may have left us, but there is a little bit of him in us all. We invite you to share your memories, photos, experiences, secrets and stories of his influence on your life, group, business or ideas. Please email them – before 25th November-  to: james@gscene.com.

During this difficult time the whole Gscene team reach out and send our condolences to James’ sister Ros and her family. To James’ husband Besi, always at his side, a man who walked hand in hand with James, in step, in love and who kept James smiling, laughing and utterly loved till the end, we send you unconditional love. Besi, through the dark days of grief to come know that each and every one of us misses James and are stronger because of him.

If you would like to make a donation to the Brighton Rainbow Fund in James’ memory, please visit: www.gscene.com/james

Many thanks for Simon Pepper for the photographs from the day.