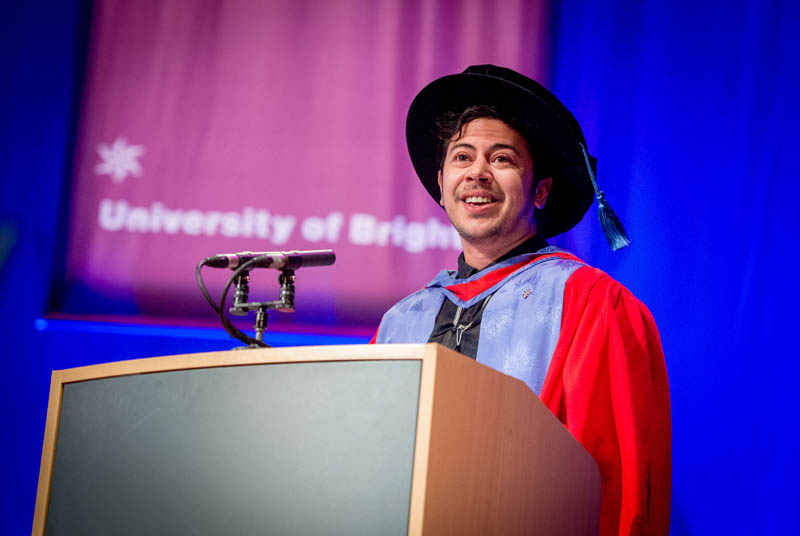 Fox Fisher, film maker, trans campaigner and artist, calls for an end to debating people’s gender and to celebrate all people for who they are.

Fox was speaking after receiving an honorary Doctor of Arts from the University of Brighton in recognition his contributions in raising the profile, both nationally and internationally, of issues affecting trans-people and the promotion of arts and media.

Fox said there had been progress but trans people were still suffering: “While a lot has happened for trans people in the past years I feel that we are still struggling with the same issues. Trans people’s identities aren’t respected as much as they should be and we constantly have to prove, explain and justify our experience.

“We are constantly being put down and humiliated and a lot of trans people experience stigma, discrimination and even violence. Recent reports show that 48 per cent of trans youth have considered or attempted taking their own lives – almost one in two.

“Progress was being made but sometimes it just does feel quite slow and the world seems quite unjust.

“I hope that in the future trans people will be respected and recognised for who they are. I hope that non binary people will receive legal and social recognition – that’s the X on the passport – and the right to marry as well.

“I want us all to be celebrated for being who we are and I want there to be a day when no one has to justify their experience or debate it with anyone because identities are not up for debate and never should be.”

Fox, who graduated with an MA in Sequential Design and Illustration from the University of Brighton in 2007, was speaking during awards ceremonies at the Brighton Centre on Tuesday (July 25).

Fox, brought to tears at one stage, said of his award: “An acknowledgement of this kind really helps me feel I am on the right path and I am very honoured to accept it. It is such a surprise. It speaks volumes when it comes down to trans awareness and it is wonderful to have that acknowledgement not only for myself but for trans people.”

Fox who regularly appears on TV and facilitates interactions with mainstream media on the representation of trans people was named one of the top 10 outstanding contributors to LGBT+ life at this year’s British LGBT Awards.

He was introduced by Professor Robert Mull who said Fox had pushed the boundaries of his field to the benefit of society as a whole, and had reflected values important to the university: creativity, sustainability, partnership, inclusivity and “sheer bravery”.