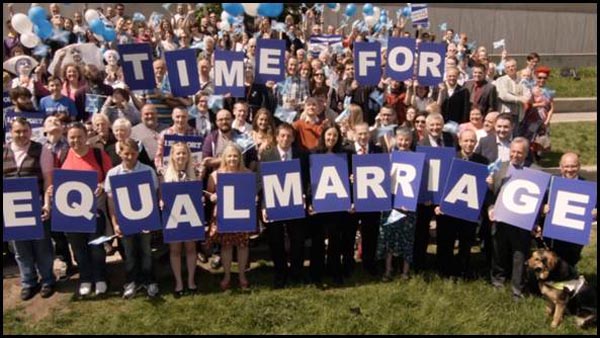 The video campaign features leading Scottish celebrities, politicians, religious ministers, and ordinary couples from across the country, voicing their support for equal marriage and declaring that in 2013 It’s Time LGBT people in Scotland had equal rights.

The campaign is being launched to mark five years since the Equality Network started Equal Marriage, the UK’s first campaign for same-sex marriage, in June 2008. It also comes at the beginning of an historic week in which the Scottish Government is set to introduce the Marriage and Civil Partnership (Scotland) Bill in Parliament.

The Equality Network video aims to help build momentum for a change in the law as MSPs decide how they will vote on the equal marriage legislation. The charity also hopes it will help focus the minds of MSPs on what they see as being the positive issues at the heart of the bill; love, equality and freedom of choice.

Equal marriage supporters featured in the video campaign include the First Minister and the leaders of all five main opposition parties in Scotland, as well as religious ministers from the Church of Scotland, the Scottish Episcopal Church, the Quakers, Unitarians, the Metropolitan Community Church, and Liberal Judaism.

“We’re proud of the ‘It’s Time’ video campaign, which demonstrates the breadth of support that exists for equal marriage in Scotland, and reflects the values of equality and compassion that have always been at the heart of our society. Thirty-three years ago Scotland finally decriminalised homosexuality now, in 2013, its well-and-truly time that LGBT people were granted full equality under the law. We hope that in the coming months MSPs will vote by a clear majority to give same-sex couples an equal right to celebrate their love and, in doing so, they will send out a strong message to the world about the kind of fair and progressive country we want Scotland to be.”

It’s Time was filmed on location across Scotland by, the  Glasgow-based video production company, Production Attic.

Sharleen Spiteri, the lead singer of Texas, said; “I support the Equality Network’s Equal Marriage campaign because I believe that you should be able to love whoever you want to love, and you should be allowed to be with that person if you want to be regardless of sexuality.”

Lorraine Kelly, the Queen of Daytime TV, said; “I wanted to support the Equality Network’s Equal Marriage campaign because I think two people who love each other and who want to make a commitment to one another in front of friends and family is something very special and should be applauded. Why should the fact they happen to be gay make a blind bit of difference? We need more love and more equality in the world. Equal marriage would be a step in the right direction and I’m baffled that anyone would want to oppose it and stand in the way of any couple’s happiness.”

Opinion polls have shown consistent public support for same-sex marriage across Scotland. The most recent poll was conducted in June 2012 by Ipsos MORI on behalf of the Equality Network. It showed record support with 64% of Scots in favour of a change in the law, and just 26% opposed. Separate polls conducted over the past three years by Populus, YouGov, Angus Reid, and the Scottish Social Attitudes Survey, have all shown similar levels of support.

Support for equal marriage is also high in the Scottish Parliament. Over two-thirds of MSPs have now signed the Equality Network’s ‘Equal Marriage Pledge’ committing themselves to voting in favour of same-sex marriage. Signatories include First Minister Alex Salmond, all Cabinet Ministers, and the leaders of all four Parliamentary opposition parties. Whilst 88 MSPs have now said they will vote in favour, just 11 remain publicly opposed.

Most countries around Scotland already have same-sex marriage, including Iceland, Norway, Sweden, the Netherlands, Denmark, Belgium, France, Spain and Portugal. The UK Government are currently in the process of introducing same-sex marriage in England and Wales, whilst Ireland is considering a change in the law to allow it.

Across the Atlantic, same-sex marriage is already legal in Canada and many US States. Within days the Supreme Court is due to make a landmark ruling on whether or not same-sex marriage should be recognised in California and by the Federal government of the United States.