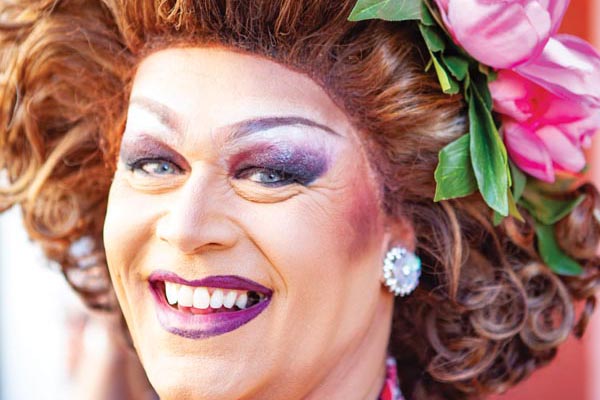 For Brighton’s Wain Douglas – the drag queen Kara Van Park, it all started in Hollywood films – she talks to Brian Butler about school bullying, Les Miserables and a secret future project.

AS an overweight child, Wain Douglas was subject to constant bullying at school. His means of escape was to immerse himself in the song and dance musicals of Hollywood at its height.

“I went to an old style grammar school which was very academic. There was no tradition of school plays and music, “ he says.

But at 15 years old he was asked to play Pharaoh in a school production of Joseph. Suddenly the bullies wanted to be his friend. But she rebelled. “I’ve never suffered fools so I saw through it. Cross me once: it’s a mistake; cross me twice it’s all hell,” he reveals.

At that teenage stage he knew he wanted to be an actor. “It’s not about adulation; it’s about being someone else – stepping out of me for a short while.” His mother supported his wish to go to drama school but insisted he had a trade to fall back on. It was a far-sighted move.

“My cousin had her own hairdressing salon so I did an apprenticeship with her,” – a job he was to return to in the theatre world years later.

Aged 18 Wain went to the Italia Conti stage school. He supported himself with the help of a 100 per cent grant and by Front of House jobs in West End theatres at night.

By the time he left Italia he was set on a dancing career and pursued it successfully for a while. Tours of Joseph, Hair and Fame followed and he found his career moving more towards singing and acting.

While in Singing In The Rain, he stood in for a principal and by chance was seen by someone from the Cameron Macintosh organisation. An offer immediately followed to audition for Les Miserables in the West End.

He walked on to play the criminal inn keeper Thenadier whose great show stopper is Master of the House, and found him self playing opposite the wonderful Rosemary Ashe, and later was involved in both the 25th anniversary concert and the more recent film of the musical.

Becoming disenchanted with the cost-cutting in production values, he returned to his first job but this time advising, creating and maintaining hair and make up for some of the West End’s biggest shows.

But Wain was to take another road and friends suggested that he develop his regular panto dame act into a drag performance.

And so Kara was born! “It all took off very quickly. I wasn’t expecting the attention but also the backlash from some.”

His great initial strength, which makes him an outstanding act today too, was his strong dramatic voice and theatrical background.

“For me, it’s totally about pleasing the audience,” he admits.

He says he’s eternally grateful to drag act Baga Chipz who gave him  his first break at London’s Admiral Duncan. “He pushed me into it. The other big influence was Son of a Tutu – one of the most incredible people and the most giving soul I know.”

He’s currently working on two productions – first playing the trans character Bernadette in Priscilla Queen of the Desert in Brighton for a week in December at the Old Market.

And crucially he’s also working on what he calls a “secret project” which will mean drag takes a bit of a back seat. He will say nothing more at the moment .

Wain has strong views about gay politics and prejudice which he sees within the wider LGBT+ communities, particularly about trans people and older gay men.

“If we can’t accept each other, how can we expect anyone else to accept us?” he wisely says.

Asked what advice he would give to a 15-year-old Wain, he says very quickly “keep your eyes and ears open and your mouth shut. I’ve had to stand my ground  because I’ve fought for what I’ve got – I won’t be taken for granted,” he says firmly.

But our conversation goes back to Priscilla. “I can’t tell you how excited I am. It’s a dream role, back to my musical theatre roots and those of my drag act.. it will show Brighton more of what I really do , and should make a few people sit up and take note.. Bernadette is not a drag queen – she’s a trans woman. The show is very camp and theatrical but because of the trans element, you have to avoid sending it up – that would be disrespectful to trans people,” he says.

Asked what up and coming drag performer he rates, he immediately says – as Davina Sparkle did last month in the magazine – Pat Clutcher. “A total professional with a fantastic voice,” is Wain’s verdict.

Brighton is a tough scene to crack and be accepted, says Wain, but there are some outstanding performers and he rates Miss Jason as one of the best. “She has the audience in the palm of her hand – she’s got them from the moment she walks on stage.” he says.

It’s a typically generous view of his colleagues and one that many of his fellow performers would say was also true of Kara.

Priscilla plays at the Old Market, Hove from December 4 to 8