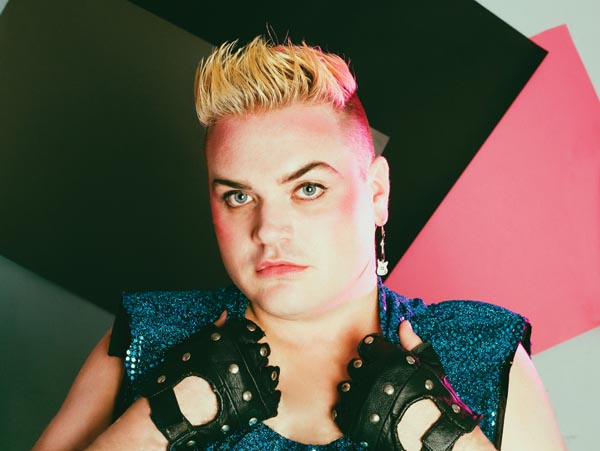 Graham Robson catches up with the multi-talented Brighton-based musician Paul Diello to talk music, things to look out for on the queer scene, and what you can expect at his award-winning show, El GeeBee Tea Queue!

Tell us a bit about yourself…
I’m a singer, pianist and songwriter, and I’ve released a couple of albums and toured all over the place. I spent a year in Berlin recently and wrote a show called Epicene, which features me and an eight-piece band performing songs by all my favourite female artists and telling stories of growing up in Worthing in the 1980s/90s with gender confusion. More recently I’ve started my own promotions company called Fourth World Promotions and we put on LGBT+ events in Brighton and I even had my own bespoke area in Preston Park at this year’s Brighton Pride called Queer Town.

How did you get into music?
As far back as I can remember I’ve always been obsessed with music, particularly female artists such as Kate Bush, Bjork, Annie Lennox and many more. My brother played guitar and I always sang and played keyboards, we used to write songs together as kids and then we started putting bands together when we reached our teens. The first record I remember hearing was Suzanne Vega’s Solitude Standing, I still love that album. I also fell in love with Madonna when I was four years old and haven’t looked back!

Describe your look…
Cheap! Everything I own is from thrift shops or Primark! I splashed out recently and bought a shirt from H&M! Messy bleached blonde hair, lots of glitter, red lipstick, floral prints, and pleated skirts – I love a studded fingerless leather glove and I’ve been known to wear women’s lingerie on stage!

Your night El GeeBee Tea Queue won best club night at this year’s Golden Handbag Awards. Tell us a bit about it.
I was so thrilled to win the Golden Handbag! El Geebee has only been running for just under a year so to get that recognition so early on was really exciting! It’s been such a great experience and I’ve met some awe-inspiring performers from the LGBT+ communities. The premise of the night is that it’s a total mixed bag of entertainment, some live music, comedy, cabaret and spoken word, loads of different flavours, all in one night with local, national and international artists.

The atmosphere is fantastic, it’s a small space in the cellar bar at the Brunswick in Hove so it feels super intimate and inclusive, the audience are as much a part of the show as the performers and by the end of the night we all feel like we’ve experienced something together, it’s a ball!

Who or what inspires you?
Living in Berlin was massively inspiring, I wrote my whole show whilst there. Kate Bush is a huge inspiration, after seeing her live I went home and wrote 10 songs! My friends inspire me; Brighton inspires me. It’s hard not to take a bit of inspiration from everything around me really, when I put my phone down for long enough and actually take in my surroundings I’ll usually see something that will seep its way into a creative idea!

What gets you up in the morning?
As well as all the musical fun I also run an after school club for children so I’m up in the mornings answering emails and phone calls armed with a pint of really strong squash and a piece of toast!

What do you get up to away from music?
I love travelling – a good European city break or further afield, a long bus or train journey with a good book. Going to other people’s gigs, music festivals, drinking wine and eating too many calories with my friends and laughing at rubbish. I can often be found just rifling through my record collection and staring at it for ages! I love a good house party but I also love just staying in and hanging out with the boyfriend and the cats!

Aside from your own night, where else can you recommend in Brighton?
There are loads of really awesome looking Queer nights popping up in Brighton, I haven’t made it to Queerdom yet at the Caroline of Brunswick, but that always has a fab line-up. Drag You Under the Bus always put on a great night. A singer called Ebony Grace performed at one my events recently and she completely blew everyone away, spellbinding! Any event that’s hosted by Alfie Ordinary is guaranteed to be a scream because he is just fabulous. There’s no shortage of fantastic LGBT+ talent in this town.

If you could have dinner with three people, living or dead, who would they be?
Dolly Parton for the overall hilarity and adorableness, Janis Joplin for the fun rock & roll stories (and she’d definitely bring a bottle or two of Southern Comfort) and Gael Garcia Bernal for the mouth-watering eye candy.

Where can we catch you next?
El Geebee Tea Queue has its first birthday on October 14 and we have an amazing line-up for it! Fourth World Promotions are running a Kate Bush tribute night on November 30 at the Brunswick, which is not to be missed. I’ll be bringing a new updated version of my show Epicene back to Brighton Fringe next May, and I’m currently working on my third album which will be released next year. I’m also looking forward to coming back to Brighton Pride for another Queer Town!