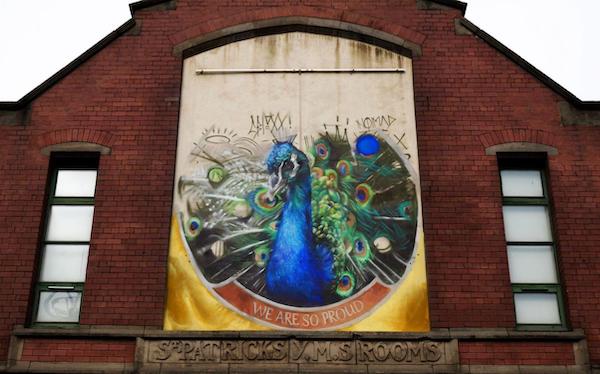 On Wednesday, April 6, global artist Cbloxx aka Jay Gilleard will reveal The Peacock mural in Leeds city centre celebrating Marching Out Together – the community paving the way for an inclusive space for LGBTQ+ fans at Leeds United Football Club (LUFC).

Marching Out Together was founded in 2017 by Andrew Tilly and Drew Harrison, with the support of LUFC, to create a safe space for LGBTQ+ supporters, their friends, family and allies at LUFC’s matches. The group’s wider mission is to bridge the gap between the LGBTQ+ community and the stereotypically masculine fanbase of football. Their vision is to remove homophobia from the game, address toxic masculinity promoted within it, and raise LGBTQ+ acceptance, tolerance, and attendance levels in football.

The perfect artist for the occasion – Cbloxx is a non-binary, multidisciplinary artist hailing from Yorkshire. Their art is seen by audiences worldwide, with a tangled myriad of humanitarian issues sitting at the epicentre of their portfolio, tactfully producing public art murals that attempt to reconnect local people to their environments, honouring local community heritage and stories.

Cbloxx said: ”It’s an honour to be painting back in a place I used to call home. Leeds has always rallied for liberalism, equality, and multiplicity, its cultural significance is something to remain incredibly proud of. Speaking personally, football at its very best is a cohesive healer when it champions diversity. Football signifies a unification, the Leeds chant All Leeds Aren’t We speaks volumes and is a wonderful sentiment to start ideas flowing around LGBTQ+ inclusivity.

“The core thematic of The Peacock really is Pride, what is more sassy and full of pride than a peacock? Its otherworldly flamboyance, confidence and striking visuals made it a focal point no brainer. To convey the notion of activism, protest and visibility I borrowed aesthetics from the old coal mining embroidered flags, which echo the typical northern working class heritage that is so often celebrated in my work.

“It’s hard to not be inspired by your own ancestry! The elegance and creativity executed in the banners really highlight the ornate features of the building, so that it adds to its aesthetic beautifully.

“With The Peacock I hope to echo the sentiments of Marching Out Together, take some visible space for LGBTQ+ football fans and spread a wider message of solidarity and togetherness.”

The mural is currently a work in progress and will be revealed on Wednesday, April 6 on East Street Arts Studio, St Mary’s Ln, Leeds LS9 7EH.

Learn more about Marching Out Together HERE and Cbloxx HERE.