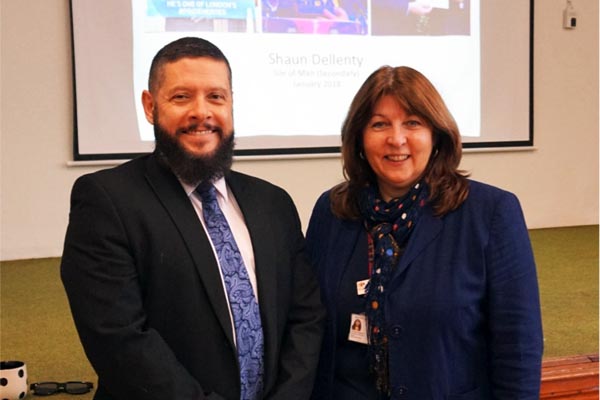 In January, 2018 Dellenty began a long-term, extensive suite of work supporting the Isle of Man Department for Education, Schools and Culture to help the Island’s thirty-two primary and five secondary schools become more fully inclusive for LGBT+ students and for those perceived to be ‘different’ in a manner that renders them vulnerable to bullying.

Homosexuality was only decriminalised on the Isle of Man in 1992 and same-sex marriage was legislated for on the Island on July 22, 2016.

The Island’s equivalent of the UK Equality Act is being phased in from January 2018 and places sexual orientation and gender reassignment as ‘protected characteristics’ meaning that all Isle of Man schools have a duty to protect all young people from discrimination and work pro-actively to foster good relationships and further equality.

Dellenty is a multi-award winner for his existing portfolio of LGBT+ inclusion work, having been named ‘Education Champion’ Excellence In Diversity Awards 2016, awarded the Mayor of Southwark’s Highest Civic Honour at Southwark Cathedral in 2016, ‘Points of Light’ designation from Prime Minister David Cameron and in May 2017 official recognition from the three Faiths Forum.

Dellenty has been supported in his work in schools by fundraising from the Brighton Actually Gay Men’s Chorus.

In March 2016 he delivered a rousing keynote speech at the International Diversity Conference alongside a world-class line of speakers, including Heather Melville OBE. In Autumn 2017 he was invited back by the Isle of Man Department for Education, Schools and Culture to begin work with schools.

Over the course of the initial week of work, he delivered assemblies and workshops to primary and secondary age pupils, met with the Isle of Man LGBT+ Youth Group in Douglas, led training for the School Improvement Team at the Department for Education, Schools and Culture and made history by addressing and leading workshops with all senior Isle of Man school leaders and the Minister for Education, Sport and Culture the Honourable Graham Creegen MHK.

Dellenty said: “I feel highly privileged to be invited to support the Department to help island schools build on their existing good practice to meet their moral and statutory duties on bullying on behalf of all of the diverse young people living on the Isle of Man.

“Having borne witness to some of their stories, I know how much this suite of work means to so many and it is a once in a lifetime opportunity to make a huge positive difference to the lives of young islanders and to further nurture an island community where difference is viewed as something that we all have a common and therefore binds us together as human beings.

“After such an inspiring week, I cannot wait to return in February during LGBT History Month to continue my work with the school, island communities and other agencies such as the police.”

Dellenty will deliver a FREE public talk on positive LGBT+ inclusion in schools at Amnesty International UK Headquarters in Shoreditch, London at 6.30pm on February 19 during LGBT History Month.

Photo shows: Shaun Dellenty with Chrissy Callaghan of the Isle of Man Department of Education, Sports and Culture at Ramsey Grammar School where he delivered six student assemblies and worked with School Council and Staff.