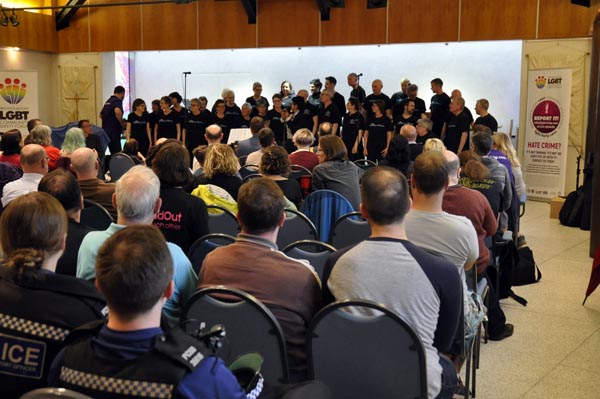 The public vigil marking International Day Against Homophobia, Transphobia and Biphobia (IDAHOBIT) was moved indoors to the Dorset Gardens Methodist Church yesterday due to the pouring rain.

IDAHOBIT marks the day in 1990 when the World Health Organisation removed homosexuality from its International Classification of Diseases.

The purpose of IDAHOBIT is to raise awareness of LGBT+ rights and stimulate interest in the work of LGBT+ activists worldwide. Events this year were taking place in more than 120 countries on every continent in every region of the world.

Following a warm welcome by the Mayor of Brighton & Hove Pete West on his final day in office, speakers including, Peter Kyle MP for Hove & Portslade, Cllr Warren Morgan Leader of the Brighton & Hove City Council, Rev Michael Hydes, Cllr Phelim MacCafferty Convenor of the Greens, Sgt Peter Allan from Sussex Police and Ruth Hughes from the Rainbow Chorus all highlighted the plight of LGBT+ people in Chechna and called on our national politicians to speak out and demand the killings stop.

Alice Denny performed some of her wonderful poems including Street Cleaning 2017, Normal and the thought-provoking The Universal Ugly Tranny. AJ Paterson sang with guitar and the Rainbow Chorus performed You are my sister, Hand in Hand, and A Million Voices before leading everyone out of the church singing Siyahumba, to bring St James Street to a standstill as everyone made a minutes protest noise.

The Vigil was organised by volunteers from the Brighton & Hove LGBT Community Safety Forum.