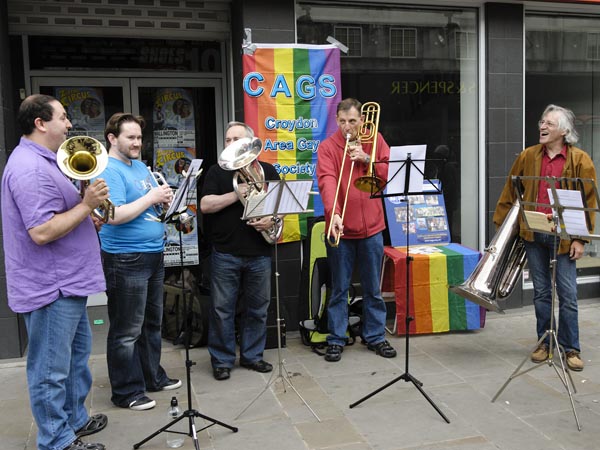 On Saturday, May 18, local churches, and local lesbian, gay, bisexual and transgender (LGBT) groups, came together in a common cause in North End, Croydon. The event included stands for each of the groups and churches. Leaflets and Quaker chocolate were handed out. Musical was provided by member of the Croydon Brass Band.

The event marked IDAHO, the International Day Against Homophobia and Transphobia. Several. of the stands carried printed prayers for the victims of homophobia.

Rainbows Across Borders, a new group who support LGBT asylum seekers were present, several of whom told tales of extreme and violent persecution in their native countires.

“At the heart of our faith is the belief that all people are made in the image of God. Victims of homophobia will always find a welcome at St Stephen’s.”

“At Metropolitan Community Church (MCC) we don’t just fully welcome gays, lesbians, bisexuals and transgendered persons, we celebrate them! We thank God for LGBT people because we believe that God created all of us in our wonderful God-given diversity and everyone should be celebrated.”

“Unitarians have long welcomed people of the LGBT community into our churches and our professional ministry. This is more than mere tolerance. It is an active appreciation of the gifts of many who have found themselves outside the supposed mainstream of human sexuality, just as we live outside the mainstream of popular religion.”

“In Croydon we try to support lesbian and gay citizens from around the world who seek asylum here to escape persecution, and even death, from homophobic regimes in their homelands”

“North End often seems to attract individuals and groups who want to proclaim their specific or conflicting religious interests, and it was good to see so many different people working together and doing so very happily.”

‘The churches taking part were: