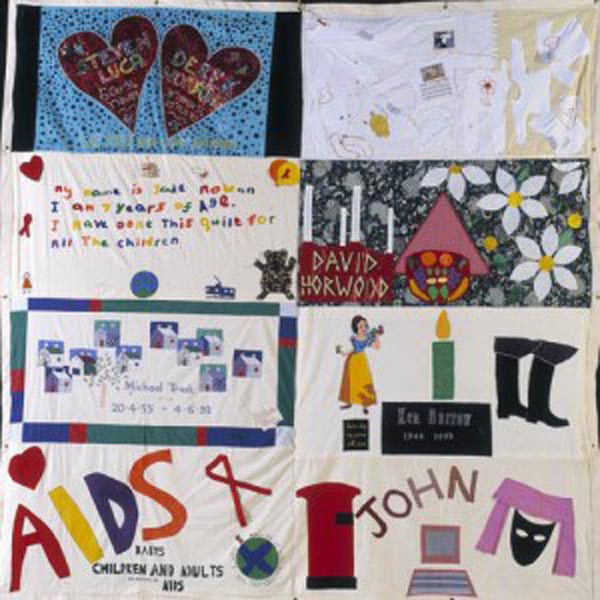 An iconic quilt panel, commemorating the lives of those lost to the AIDS epidemic in the UK, will be displayed at the Church of the Immaculate Conception in London from November 30 – December 4.

The display and a World AIDS Day Mass on Thursday, December 1 at 6pm are part of a series of London-wide events, forming an AIDS Quilt Trail across London.

Seven churches of various denominations are among the community locations taking part, with the Church of the Immaculate Conception being the only Roman Catholic church involved.

The LGBT Catholic Westminster community is based at Farm Street, and its Beacon Music Group will accompany the World AIDS Day Mass on December 1.

Martin Pendergast, a member of the LGBT Catholics Westminster Pastoral Council and one of the first Catholics to develop HIV/AIDS support in the 1980’s, said: “We’re delighted that Farm Street Church is hosting a part of the UK Names Quilt. The panels not only show the emotional and physical effects of AIDS at the beginning of the epidemic, but are also a huge part of social history, and a great reminder of how far we’ve come in the last 30 years as treatments have developed.”

LGBT Catholics previously hosted sections of the UK Names Quilt at the Church of the Assumption, Warwick Street, during London’s 2012 World Pride.

The Quilt Trail has been organised by a coalition of HIV/AIDS charities including the George House Trust, the Terrence Higgins Trust, Positive East, The Food Chain, Positively UK, and Sahir House, supported by the Elton John AIDS Foundation.

The Quilts show how far the UK has come in the fight against HIV, no longer stopping people living with HIV from leading long and healthy lives.

Even so, there is still much to be done to tackle stigma and discrimination, prevent further transmission, and encourage diagnosis for the 1 in 6 people who are unaware they have the virus.