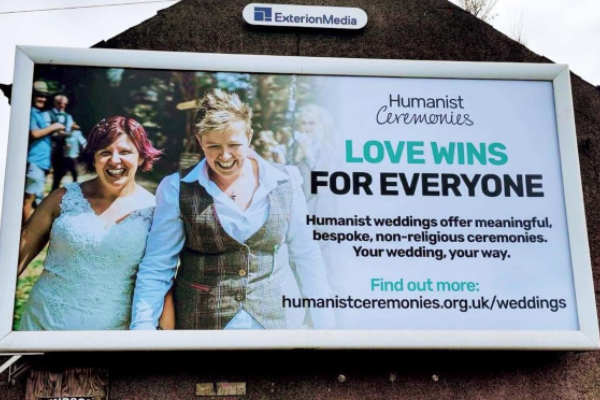 The billboards feature pictures of same-sex couples with the words ‘Love wins for everyone’, and promotes Northern Ireland Humanists’ bespoke, meaningful, non-religious wedding ceremonies, which are conducted by its highly trained network of celebrants.

Non-religious ceremonies are growing in popularity in Northern Ireland, particularly since humanist marriages gained legal recognition in 2018, and Northern Ireland Humanists has been inundated with same-sex couples wanting to get married in 2020 when the new law is expected to come into force.

Boyd Sleator, Northern Ireland Humanists’ Coordinator, said: “LGBTQ+ people in Northern Ireland have suffered for too long under archaic laws influenced by religious groups which have prevented same-sex couples from being able to legally marry. Marriage is a fundamental human right and these billboards celebrate equality, fairness, and the enormous progress that we’ve achieved.

“From next year, same-sex couples will be able to legally wed the person they love, and we hope people will choose a bespoke, humanist wedding to mark their special day.”