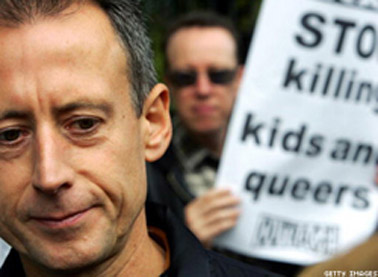 Tatchell was wrestled to the ground by the President’s bodyguards and then arrested by Metropolitan Police officers. Peter had been planning to attempt a citizen’s arrest of President Susilo Bambang Yudhoyono who stands accused of human rights violations.

“The President stands accused of war crimes in East Timor and West Papua.”

“It is appalling that the Royal Family and the Prime Minister are hosting a man who is implicated in mass murder.

“I was arrested for a peaceful, lawful protest, which involved nothing more sinister than holding a flag. I was also threatened with further charges for “shouting loudly” the words “Free West Papua” and for what one police officer described as “pointing your finger at me in a way that I find intimidating.”

“I am saddened that some police officers apparently have no respect for freedom of expression and the right to peaceful protest.

“I was detained unlawfully and deprived of my liberty for two hours. After being taken to Charring Cross police station, I was eventually released without charge. Clearly, the police knew they had over-stepped the mark and that the charges against me were baseless.”