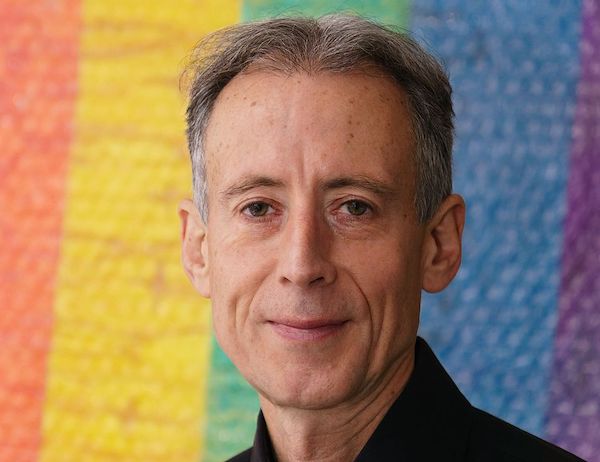 The award is given to one exceptional person who has made great campaigning a lifetime’s work. In Peter’s case, this has meant campaigning for human rights for over 50 years. Although best known for his work on LGBTQ+ rights, he also campaigns on issues of democracy, civil liberties, social equality, environmental protection, animal rights, peace, and global justice.

Peter Tatchell said: “I’m honoured and pay tribute to the many amazing campaigners I have worked with over the last five decades. I dedicate this award to the people of Ukraine and Syria who are heroically resisting Russian imperialist aggression.”

Peter first took a stand in 1967, aged 15, against the death penalty and for Aboriginal rights in his homeland of Australia. From 1971, he was a leading activist in the Gay Liberation Front in London. Two years later, he staged the first LGBTQ+ rights protest in a communist country, East Germany, which resulted in his detention and interrogation by the Stasi.

He stood as a candidate in the Bermondsey by-election in 1983, at a time when not a single one of the UK’s 650 MPs was publicly gay. What followed has been described as ‘the most vicious parliamentary election in London’s history’, during which he was subject to violence and homophobia.

Peter co-founded the gay, lesbian and bisexual rights direct action group OutRage!, which described itself as ‘a broad based group of queers committed to radical, non-violent direct action and civil disobedience’. In 1994, Outrage! ‘outed’ 10 Anglican bishops, accusing them of hypocrisy for publicly endorsing the Church’s homophobic stance. Four years later, he interrupted the Easter Sermon of the Archbishop of Canterbury in protest at Dr Carey’s support for laws that discriminated against lesbian and gay people.

In 1999, his attempted citizen’s arrest of the Zimbabwean President Robert Mugabe, on charges of torture, led to his own arrest. Undeterred, he repeated the attempt in Brussels in 2001, which resulted in him being beaten unconscious by Mugabe’s bodyguards and left him with permanent minor brain injuries.

Two years later, he ambushed and halted Tony Blair’s motorcade in protest at the Iraq war. He was assaulted by neo-Nazis and arrested at the Moscow Gay Pride parade in 2007.

Peter’s work on environmental issues spans 40 years. Back in the late ’80s, he warned of the dangers of global warming, resource depletion, species extinction and environmental degradation.

Sue Mendus, SMK Awards judge, said:“Peter Tatchell came to the UK (from Australia) in 1971 – four years after the partial decriminalisation of homosexuality but during a period when anti-gay laws were policed more aggressively than ever before, and when much homophobic discrimination was both legal and commonplace.

“Through his work with the Gay Liberation Front, he campaigned not only for an end to homophobia but for the acceptance of gender and sexual diversity. A commitment he has pursued for many years and retains today.”