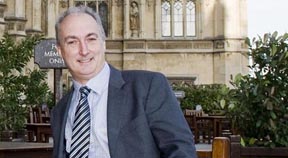 MIKE WAS appointed by the Prime Minister in September 2013 to be his Intellectual Property Adviser. In the role, he has worked closely with the Interlectual Property Office and others on many issues, including the IP Bill and the SIs on exceptions following the Hargreaves report.

He has also published three seminal reports on IP issues, namely search engines and advertising revenue on pirate sites, with his third report on Copyright Education and Awareness, published today.

Since his appointment, Mike has received praise for his work from within industry, as well as parliamentarians from both sides of the House. A number of colleagues have praised Mike’s contribution to Parliament as an expert in the field of IP and that his endeavours have been valuable to the country.

In his letter to the Prime Minister, Mike wrote: “As you know, I announced in July that I would not be seeking re-election in 2015 and having undertaken this role for a year I now believe that this it is time for me to step aside as we approach and plan for the General Election.

“As your IP adviser I have been privileged work closely with the Intellectual Property Office (IPO) and the national Police Intellectual Property Crime Unit (PIPCU) based at City of London Police. John Alty, Chief Executive of the IPO, has been excellent Government official to work with and provided me with first-rate support. Also, Commander Stephen Head is an outstanding leader of a great team at PIPCU.

“Industry, both at home and abroad, have been extremely pleased with the conduit role that my position facilitated and I hope that this improved dialogue will continue. I feel that my contribution has significantly raised the importance of IP with legislators and others – IP has now become an accepted intrinsic part of entrepreneurship.

“I am pleased that the two reports that I have submitted previously to you, Search Engines and Piracy: A Discussion Paper and Follow the Money: Financial Options to Assist in the Battle Against Online Piracy, have been a helpful contribution to how our country addresses Intellectual Property issues. My final report on ‘Education’ I hope will help drive a wider message.”

Mike commented: “It has been a wonderful opportunity to work with the Prime Minister in this way. Feedback from industry has been very encouraging throughout the time that I served as the Prime Minister’s adviser and I have very much enjoyed the work that was involved in both tackling IP crime and boosting the profile of IP generally.”

The Rt Hon David Cameron MP, Prime Minister, said: “I wish to thank Mike for his hard work over the last year in raising the profile of the importance of Intellectual Property. Respect for Intellectual Property is crucial to our economy and the role that Mike has played has been a great help to the Government in addressing this important issue.”

The Rt Hon Sajid Javid MP, Secretary of State for Culture, Media & Sport, added: “Mike has been a passionate and powerful advocate for intellectual property and I would like to play tribute to the role he has played as the Prime Minister’s IP adviser. He has made a whole series of thoughtful recommendations which we have has either already acted upon, or are actively considering. I’d like to thank him for all he has done.”

Commander Stephen Head, City of London Police Intellectual Property Crime Unit (PIPCU), said: “I was very sad to hear Mike Weatherley is stepping down from his role as the Prime Minister’s IP Adviser and wish him the very best for the future. He has been an inspirational leader in raising public and private sector awareness of the importance of IP crime to the UK economy and a dedicated and highly valued supporter of our Police Intellectual Property Crime Unit throughout its first year in operation.

“In particular Mike’s hard work and commitment has focused Government attention on the key facilitators of IP crime and been instrumental in the establishment of a credible UK deterrent involving a staged multi-agency approach that is now recognised as international best-practice and is being replicated by a many other countries around the world.”