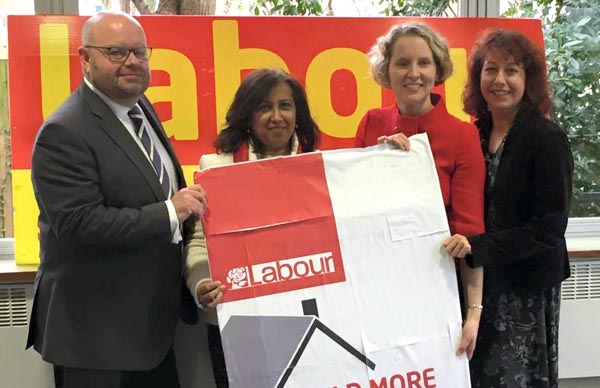 On Monday (January 26), Brighton and Hove Labour launched five action pledges to tackle the critical housing situation in the city.

Labour Leader Cllr Warren Morgan said: “Delivering a secure and affordable place to live for our residents is one of the big challenges we face in May if elected to run the city. It’s a challenge we are up for; delivering more new homes, making the private rented sector work for tenants, delivering real affordability to those who need it.”

Purna Sen, Labour’s parliamentary candidate for Brighton Pavilion, added: “Having met so many private tenants living in appalling conditions and financial hardship in our City, I am clear that Labour plans for more secure tenancies, predictable rents and an end to up-front fees are vital. And Labour is already in discussion at the national level with professional associations to make sure those proposals become practical policies. Locally, during the four years they have been running the City, the Greens have not helped private tenants. That’s why Labour’s plans for a landlords’ register, a Tenant’s Charter and more affordable housing are so important.”

Nancy Platts, Labour’s Parliamentary candidate for Brighton Kemptown, concluded: “Many people living in rented accommodation are fed up with the poor standards of maintenance and insecure rental agreements. I have been inside some properties where there is mould growing on the ceiling and badly fitting windows but people are worried about asking for repairs for fear of being evicted. Everyone is entitled to a warm and secure home and that is what I will campaign for if I am elected as the MP for Brighton Kemptown and Peacehaven.”

• We want to secure 40% affordable homes in new housing developments and deliver family housing as part of the affordable housing requirement.

• We will consult on introducing a register of landlords to protect tenants and raise standards in the private rented sector. A licence will be used, where needed, to tackle antisocial behaviour in areas of HMOs.