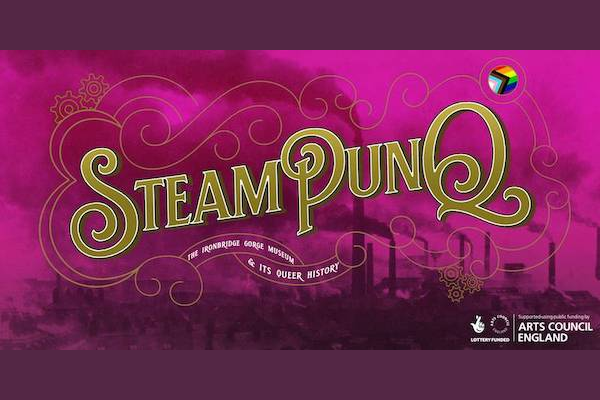 A major new research project has been launched by The Ironbridge Gorge Museums Trust to uncover the overlooked histories, including LGBTQ+, of the area – and you can get involved.

The Hidden Histories project aims to document the Ironbridge Gorge’s historical stories, characters and links to the Empire, women, disability and the LGBTQ+ community.

Funded by Arts Council England, the project kicks off with the Trust’s first-ever live online event, Steam PunQ, on Saturday, February 27 from 6.30pm. The event will be a virtual history cabaret night, featuring a look at LGBTQ+ people connected to the area, alongside cocktails and a peformance from non-binary entertainer Miss Sundi.

Sacha Coward, who has spent 10 years working with communities to make museums a more exciting and welcoming space for everyone, is leading the LGBTQ+ research. He said: “When you talk about queer history, many people don’t understand that it’s often a history of burned letters and hidden relationships – it was for much of history illegal and people were often frightened to reveal their true selves, for fear of persecution.

“I’ve come across it over and over again. It’s just not there on a blue plaque for everyone to see – you have to look between the lines to find these stories.

“If you go back to the 1800s, being queer was almost certainly going to be seen as a scandal. There were very few people who were out and proud. Unless you were a wealthy and notable figure like Oscar Wilde, you just couldn’t be that way publicly, and even Oscar was convicted, incarcerated and had to flee to France after his sexuality was revealed to the public! Queer people that were less well off than him, less protected, are even harder to find in the historic record!”

Sacha said another challenge was the area’s industrial past. “It’s quite unique to be documenting queer history in an area that has always been seen as having a very masculine, working class past, with its strong links to the Industrial Revolution.

“It’s not a traditional area to look for queer stories in. The fashion and art world, big cities like London, Birmingham and Manchester, yes – but Ironbridge, no. That doesn’t mean it’s not there, but we have to look a little harder. It also makes this work even more meaningful and important.”

The Ironbridge Gorge Museum Trust is one of the region’s premier tourist attractions, sited at the birthplace of the Industrial Revolution with 10 museums along the Gorge.