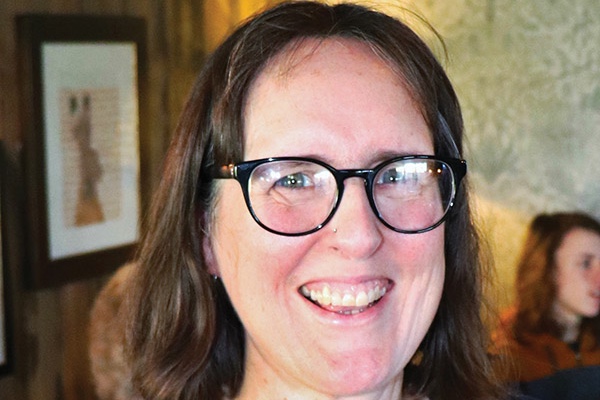 Being an LGBTQ ally is not without its challenges – and sometimes those challenges can be pretty fundamental, as Heather Leake Date, now consultant pharmacist for HIV/sexual health,    can attest.

Having come to Brighton in 1985 to study pharmacy, Heather gained an interest in HIV care thanks to lectures from visiting consultants and being in an area with a disproportionately high number of people with the disease.

With her interest in the process of finding treatments – the first day she stepped into her dispensary in June 1991 Heather was faced with two big boxes of drug supplies for one of the medical research council trials for antiretrovirals – she was at the grass roots of the fight not only against HIV but also the hatred that surrounded it.

Now the HIV chaplain for Sussex Ecumenical HIV Chaplaincy and a methodist minister, at the time Heather was training to be a lay preacher and found herself shaken by the attitudes of some so-called Christians towards to those who had contracted HIV.

“The thing that stuck in my mind was the awful headlines you would see in the tabloids. The language around anything to do with HIV and AIDS was scaremongering and harmful and horrible.”

Epitomising this was the then chief constable of Greater Manchester police, James Anderton, who famously said that Aids patients lived in “a human cesspool of their own making”. At the same time he had been vocal about his religious beliefs, which left Heather baffled.

“I had been brought up within the church and it may have been fairly sheltered but I never had that sense. If you are a Christian love comes before anything, so why would you come out and say something like that?

“Prior to coming to Brighton I didn’t really have any contact with the LGBT community but the view that was being put forward to get attention in the media was just so negative and I felt very strongly that these people didn’t speak for me or for a lot of people. I am not Mother Theresa and was not trying to preach to people, it was simply that I felt so strongly that was where I should be.”

Heather and many of her fellow christians felt they were being vilified for views that had been expressed on behalf of their faith but which were not ideals that they shared.

“It was quite striking that, from a faith perspective, there were a lot of people saying ‘this is the christian view’ but at the same time a lot of the people on the ground who were helping and befriending from outside the gay community were people from churches. They were people who might not have been expected to take on this role – little old ladies who would make tea when Open Door opened in Camelford Street, for example.”

Against that backdrop of prejudice it was no surprise that many of the people who chose to work in HIV healthcare were themselves gay.

“The people were definitely a big part of wanting to work in that area – the staff and the patients. From the staff point of view, many of the gay men had seen friends die so felt strongly that they wanted to do something for the community, but there was real camaraderie and a breaking down of barriers in the hierarchy.

“As a pharmacist my views would be listened to in a way that those of people in other areas were not. We felt we were much more one of the team.

“In an ideal world you would be treating people and would not see them for a long time between visits for good reason – but that was not the case with HIV.

“The patients were in palliative  care so a lot of the treatments were not actually treating HIV, rather those treatments would be for infections – then some were to stop that infection coming back and some were to treat the side effects. It was generally a case of medicines just being added on. One chap was taking about 60 tablets a day.

“However I now have patients I have known for nearly 30 years and it’s very rewarding to have that shared history.

“It’s Marmite, working in HIV – you either love it or you don’t.”

And how do things stand now in terms of understanding and acceptance? “It’s definitely better, certainly working within the hospital trust – there’s an LGBT workers’ forum and a lot more visibility about not just sexuality but HIV as well.

“But there are still pockets of healthcare where we are actively addressing issues and there’s a lot of work being done around stigma and lack of education.”

Photos by Gideon Mendel, taken from The Ward, published by Trolley Press