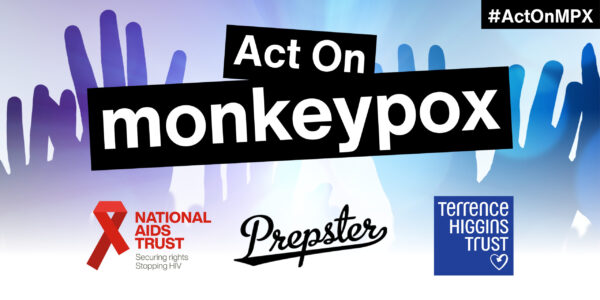 The charities have implored the new Health Secretary to take control of the country’s monkeypox outbreak to avoid an increase in STIs, unwanted pregnancies and people contracting HIV. According to the charities, this is also needed to ensure the Government’s target of ending new HIV cases by 2030 isn’t jeopardised and to stop monkeypox from becoming endemic in the UK.

Sexual health experts at THT, National AIDS Trust and PrEPster who are calling for the new Health Secretary to show fast, decisive leadership and get a grip of what the charities call a ‘lacklustre approach to tackling the outbreak’.

Write to your MP now

Sexual health services are at the frontline of the country’s monkeypox response for testing and vaccination but without any additional funding or resources. The impact of that on already over-stretched and underfunded services means some clinics are seeing a 90% reduction in access to HIV prevention pill PrEP and long-acting reversible contraception, according to data from the British Association for Sexual Health and HIV.

The charities have launched a new campaign targeting the Health Secretary, asking those dissatisfied with the current monkeypox response to email their MP asking them to urgently raise the following with Thérèse Coffey MP:

The vast majority of monkeypox cases in this outbreak continue to be in gay and bisexual men with a targeted vaccination programme being launched to vaccinate those most in need of vaccination and information.

According to the charities, this has caused anger within the wider LGBTQ+ community with more than 100 LGBTQ+ councillors writing to the previous Health Secretary, Steve Barclay MP, calling for a response proportionate to the scale of the problem. The charities anticipate a large number of people will want to write to their MP as part of this latest campaign, with monkeypox causing huge concern amongst many who want to protect themselves and others.

Ian Green, Chief Executive of THT, said: “Sexual health services were already over-stretched and under-resourced before monkeypox, but now the situation is dire with unsustainable pressure being put on clinics and their staff. We need to see action from the new Health Secretary as proof that they take their vitally important brief seriously. Thérèse Coffey must act now to stop monkeypox becoming endemic in the UK and protect the health of gay and bisexual men.”

Deborah Gold, Chief Executive at National AIDS Trust, said: “The monkeypox outbreak had not gone away and any new case should be a cause for concern. Services need additional resources now so they can get a grip of monkeypox and to ensure HIV services are not further impacted. Without these, we will see more cancelled PrEP and HIV testing appointments, additional preventable cases of HIV, and a major set back in meeting the national commitment to end all new cases of HIV by 2030.”

Dr Will Nutland, co-founder of PrEPster, said: “The national response to monkeypox has been fractured and fragmented. We now need proper leadership to ensure that the response is timely, appropriate and reaches those communities who are most in need of monkeypox vaccination and information. Precious time has been squandered in recent weeks and months, when we could have been planning for a systematic and thought-through vaccine programme.”

Write to your MP now