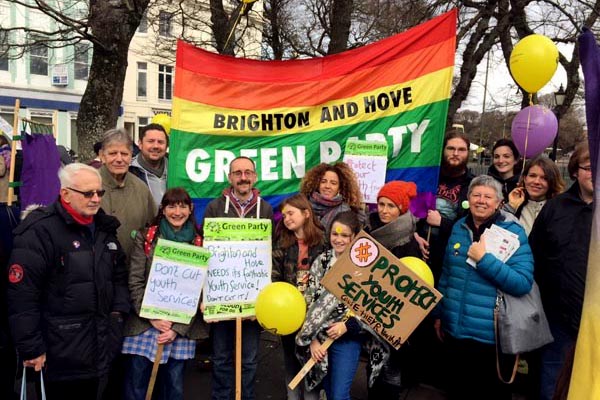 Greens to speak out for public services at weekend anti-cuts rally to fight against cuts to NHS and other ‘a matter of life and death’ services.

Coordinated by Sussex Defend the NHS and the Brighton and Hove Trades Council, the ‘Matter of Life and Death’ march will highlight the devastating impact of cuts on public services, with a particular focus on the NHS.

The rally starting at the Level at 11.30am will be followed by a public march to Regency Square.

Organisers have also asked attendees to wear something black, as a symbol to commemorate the hundreds of people who are estimated to have died as a result of cuts to public services.

Councillor Phélim Mac Cafferty, Convenor of the Green Group of Councillors will speak at the event, as will Caroline Lucas, Green MP for Brighton Pavilion.

Councillor Dick Page, Green Spokesperson for Health and Wellbeing, said: “With the Brexit shambles taking up the headlines, we Greens stand alongside all the communities protesting that if austerity is over, why in our city are health treatments being restricted, care support is harder to access, and with less and less GPs, more people are waiting longer for an appointment?

“All local leaders do is issue bland, complacent strategies & action plans. What we need is enough funding for people’s needs, and secure, publicly provided services.”

Councillor Mac Cafferty, who will address the rally at Regency Square, added: “Years of brutal cuts have pushed key services to breaking point. Under the guise of ‘savings’, and ‘integration’ our NHS is at risk of being dismantled and sold off to the highest bidder. A third of NHS contracts awarded since Hunt’s 2013 Health Act have gone to the private sector.

“Sadly, the impact of this attack on public services is all too clear. This year, health chiefs at the Royal Sussex County Hospital said staff shortages and high demand led to “the toughest winter” on record. The city now has just one GP to every 2,500 patients. 33,000 nurses left the NHS last year, combined with a 96% drop in applications from the EU as Brexit looms.

“This Saturday I will stand shoulder to shoulder with all of those marching to defend our public services. Whether it’s councils, hospitals or adult social care, so many of the services struggling to meet rising demand are being brought to their knees by a cuts and privatisation agenda. Scandalously, it is residents reliant on local services who will pay the price.”

Saturday’s march will leave from the Level at 12.30 after hearing from local speakers. A rally in Regency Square with further speakers will start at 1.30pm.