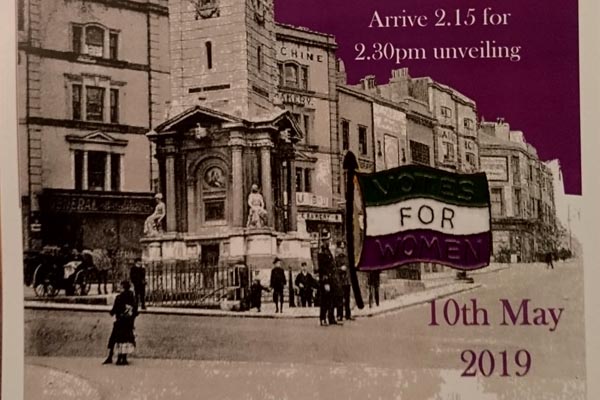 Commemoration plaque to be unveiled at former city centre branch of Women’s Social and Political Union.

BRIGHTON and Hove will tomorrow honour the brave contribution of Brighton and Hove suffragettes as the city unveils a plaque at the former city centre office of the Women’s Social and Political Union.

One of the most active in the country, the Brighton Women’s Social and Political Union (WSPU) office at 8 North Street Quadrant became a key hub in the nationwide campaign to secure some women’s right to vote.

Opening in 1909, more than 150 women attended meetings there, including Mary Clarke, sister of Emmeline Pankhurst and Minnie Turner, leading campaigner for women’s suffrage.

A plaque at the former office will be unveiled at a commemoration event near the Clock Tower tomorrow, May 10 at 2.15pm.

Green Councillor Phélim Mac Cafferty said: “101 years after women first won the right to vote Greens are proud to stand alongside all of those seeking to commemorate the brave and important contribution of Brighton and Hove suffragettes.

“Acknowledgement of this important shared history follows repeated calls from the Greens for better recognition of the role our city played in securing women’s right to vote. Last year I wrote a letter to our council’s most powerful committee calling for a blue information plaque at the site of the former WSPU offices. We are also proud to support the appeal for a statue dedicated to active local suffragette Mary Clarke.

“Because history continues to cast a shadow over the present, we also successfully pushed a set of proposals that aim to increase the participation of women in politics and we have called for Brighton Museum to adopt a quota for more women artists. The city has just elected 11 women to join our group of Green Councillors and Greens join with others celebrating the role of the suffragettes in securing a future for women in public life.”

Councillor Lizzie Deane, ward councillor for the St Peters and North Laine area that includes the site of the new plaque, added: “Suffragette women worked incredibly hard and took enormous risks in the cause of universal suffrage. Having been re-elected just last week to represent local residents I appreciate only too well that this would not have been possible without the extraordinary sacrifices made by women of previous generations, and I am enormously grateful to them. I am delighted that there is to be a blue plaque as a permanent reminder of what they achieved, and it is only fitting that they should be honoured in this way.”