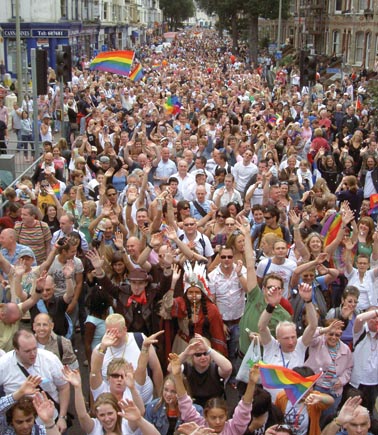 Brighton & Hove City Council ‘s Green administration has ear-marked the annual grant of £25,000 to stage Brighton Pride to be cut after the 2013 event. The Green administration, who are having to make cuts of 20 million pounds to balance the council’s books, say their proposed cuts will see no children’s centre’s close, all branch libraries remain open and they claim those needing help with council tax payments will continue to receive it.

The withdrawal of the council grant will put future Pride parades at risk.

“In its current form, we’re not sure Pride needs it.”

Cllr Geoffrey Bowden, the Chair of the Council’s Economic Development & Culture Committee is a former Trustee of Pride in Brighton & Hove (Pride South East), which ceased trading with debts of over £250,000 in 2012.

“We are making provision to help Pride as in previous years. Not all the money set aside last year was required, but we still have the same amount set aside in a reserve in case it is needed, particularly to support the organisers of the street party. As ever the council will be continuing to work with Pride and will be devoting many hours of dedicated officer time during the planning and delivery stage of the event, as well as waiving parking bay suspension fees along the parade route. The city council looks forward to working with the organisers to help deliver a safe and enjoyable Pride that builds on the success of 2012.”

Cllr Geoffrey Theobald, Leader of the Conservative Group, disagreed with the administration, saying:

“We would not support a removal of the council grant for Pride. It is an example of where a relatively small amount of council funding brings huge benefits to the city in terms of tourists that visit for the parade weekend. We would rather see the council look at making savings by increasing efficiencies within the council or by scrapping some of the more bizarre and costly green policies.”

“Any talk of removing the grant to Pride illustrates a lack of understanding as to how Pride supports LGBT community development 365 days a year and in the context of what the council pays to external community development consultants, £25,000 is in real terms peanuts and amazing value for money.

“Under Pride’s new plans, the removal of this grant could put future Pride Parades in jeopardy. This annual £25,000 grant should be ring fenced and used exclusively to help the voluntary sector develop the parade into a major tourist attraction, rather than allowing the funding to be diverted by stealth each year into the street party which has become a ‘Drink Fest’ rather than a ‘Community Fest’ with tacit support from the politicians.

“It’s so disappointing that this funding stream survived savage budget cuts under both a Labour and Conservative administration yet is being considered for axing by the Greens who masquerade as being ‘gay friendly’.

“Only in Brighton & Hove could the city’s largest public event and tourist attraction, which generates a fortune to businesses from all communities over the Pride weekend including hotels and guest houses, be punished in this thoughtless way by the political elite.”

Labour declined to be drawn on the issue.