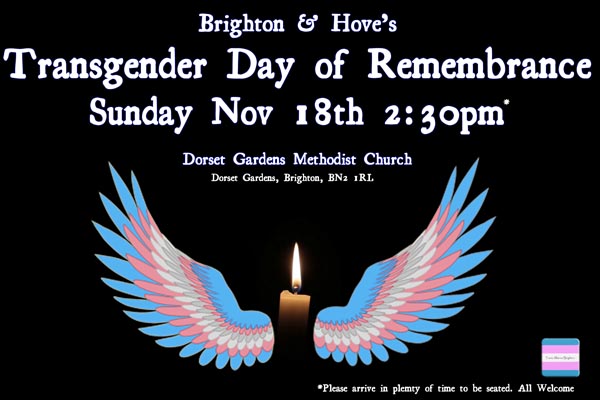 Trans Day of Remembrance (TDOR) is an annual observance each November 20 that honours the memory of those whose lives were lost in acts of anti-transgender violence.

THE community vigil honouring the memory of all those who have died will take place today, Sunday, November 18 at Dorset Gardens Methodist Church, hosted by the Clare Project and Trans Alliance – both groups that work to support trans people.

All communities are welcome to attend and pay respects at the vigil which involves reading a list of the names of those who died from an act of anti-transgender violence in the last year.  The fully inclusive Rainbow Chorus will be attending to sing.

The memorial event is multi-faith, open and welcoming to all groups regardless of faith or non-belief. The venue is also wheelchair accessible.

Ahead of the memorial service tomorrow, Convenor of the Greens, Cllr Phélim Mac Cafferty says: “This Sunday I will stand with the trans community as we come together to remember and honour those who have lost their lives to violent prejudice. In our city, between April 2017 and March 2018 there were 35 recorded hate crimes against the trans community. Although many understand our city to be a bastion of inclusion these figures attest to prejudice which is still ruining people’s lives.

“Trans Day of Remembrance highlights the horrific and unacceptable impact that transgender violence is having on our communities. We know that transphobia also takes a devastating toll on trans people’s mental health – recent figures from Stonewall remind us that 1 in 2 trans people have thought about taking their own life in the last year.

“All residents in our city, regardless of their gender, deserve to live a life safe from fear and prejudice.  In the memory of those who have lost their lives, we must continue to stamp out hate. Especially at a time when the trans community has come under renewed attack, Greens will speak out against transphobia and press for equality for our trans community.”

Councillor Mac Cafferty led the work of the council’s Trans Scrutiny Panel in 2012, which examined the needs and discrimination faced by people who identify as trans. The work led to the first health action plan to include the trans communities; a toolkit for city teachers to educate pupils about transphobia, and work with Sussex police to improve hate crime reporting.

The event is hosted by the Clare Project and Trans Alliance and everyone is welcome to attend. Arrive early to take your seat.