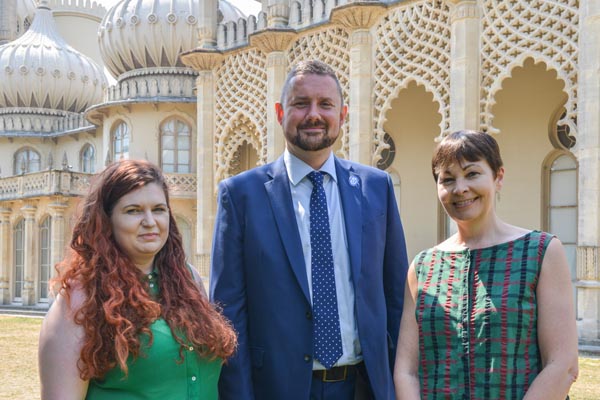 Brighton & Hove Green Party selects candidates for the Brunswick and Adelaide ward for the May 2019 council elections.

THEY are, Councillor Phélim Mac Cafferty, Convenor of the Green Group of Councillors and Hannah Clare, former Co-Chair of the Young Greens of England and Wales and a local resident.

Sitting Councillor Ollie Sykes has decided not to stand for re-selection.

Councillor Mac Cafferty said: “Ollie has been a tremendous representative for Brunswick and Adelaide residents: continuously putting the good people of our ward first. In his 7 years of service he has been a strong voice for residents. But the city will miss his scrutiny of the city council’s budget too- in administration and in opposition Ollie has brought his meticulous attention to detail to bear. I know few Councillors locally or nationally who have brought such rigour to local government finance. Ollie’s thoughtful approach and careful consideration will be sorely missed.

“I’m delighted to have been re-selected by Green Party members to stand for a third term in the Brunswick and Adelaide ward, the ward I have been proud to represent since 2011. There is no question it is one of the most beautiful areas of the city. And in the 7 years representing the ward, I have built up a thorough understanding of the needs of residents in the area and responded to hundreds of pieces of casework. I will be campaigning for the ward to continue being represented by two Green representatives and look forward to working with Hannah to ensure a Green victory in Brunswick and Adelaide in May next year.”

Hannah Clare added: “Following the great work Cllr Sykes and Mac Cafferty have done as councillors in Brunswick and Adelaide since 2011, I’m thrilled to have been selected by Brighton and Hove Green Party to continue to provide a strong green voice in the ward. I’m passionate about ensuring the inclusion of more young women in politics and proud to be standing for a party that fights for equality, inclusion and environmental justice.”

Councillor Ollie Sykes said:  “It’s been an amazing, life-changing experience being a Councillor in our city and one I wholeheartedly recommend. I’m not able to stand again in 2019 as am likely to be based outside Brighton and Hove in the next couple of years, however I will stay a committed member of the Green Party and remain politically active. Looking at key contemporary issues: Brexit, stark evidence about the state of our environment, mounting concerns about our broken democracy, the housing crisis, the relentless weakening of the state in favour of big business; it’s often just Greens fighting the progressive corner.

“I’m proud of what we’ve achieved in this city as a political group over the past seven years, both in power and in opposition: £100m of project funding brought in, much of which is now being implemented; the Living Wage for council staff, and the Living Wage commission with local employers; equal pay and allowances for council workers finally resolved after many years.

“We initiated the first council houses built in a generation plus numerous award-winning transport schemes. We raised funding for the Bike Hire scheme, which is currently the most successful in the country.

“In opposition, we have: protected the Downland from sale; and Hove Library from closure; rents have been reduced in new housing schemes proposed by the current administration. Behind the scenes it was our budget analysis that protected services amidst the financial cuts.

“At a ward level, it may be that all Councillors say they’re lucky to represent the best ward in the city. Everyone agrees Brunswick and Adelaide is a very special part of the city. It shows if there were any doubt the importance of conserving a historical sense of place; the importance of looking after this amazing Regency legacy. Of course, the same can be said about historic purpose-built public institutions such as Libraries, and public feelings about this are clear.

“Brunswick and Adelaide has a number of strong and hard-working Residents’ Associations that do a huge amount to look after our local environment and also keep Councillors on their toes. As central government cuts bite, more and more is expected of local communities but we must not take them for granted.

“Finally, while Councillors get the headlines, the real work is done by council officers. In our city they’re a quality team at all levels and it’s been a privilege and an education working with them.”