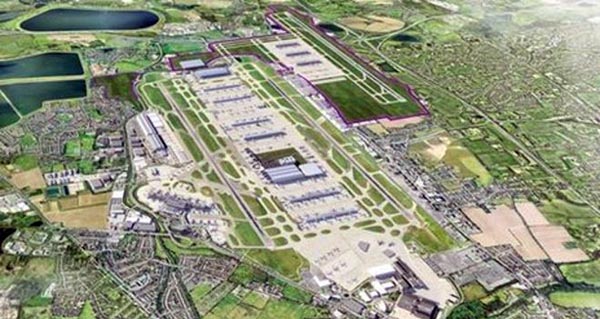 Transport Secretary Chris Grayling MP announced this morning that the government had decided on a third runway at Heathrow to increase the country’s airport capacity rather than a second runway at Gatwick in Sussex. He said: “This is the very clearest sign that post referendum this country is open for business.”

This is despite Brighton & Hove City Council expressing its strong support for a second runway at Gatwick and the Chief Executive writing to the Prime Minister to offer the council’s support for expansion at Gatwick.

“A second runway at Gatwick would have massively benefited Brighton & Hove’s economy, businesses, and residents as well as supporting our thriving overseas visitor economy.  This decision is a real blow for city.

“We will now be lobbying hard with Gatwick Airport and our partners across Greater Brighton and the Coast to Capital Local Enterprise Partnership to seek the massive investment needed in the region’s considerable infrastructure challenges.”

Cllr Theobald, Leader of the Conservative group on Brighton & Hove Council, added: “we are very disappointed that the Government has chosen not to support the expansion of Gatwick Airport. The potential benefits of a second runway for the city, local businesses and residents were hugely significant in terms of delivering jobs, apprenticeships and boosting the local economy.

“In terms of moving forward, I know that spokespersons for Gatwick airport have previously said that they could take the project forward without public money from Government and I would implore them to do so.

In the meantime, the Conservative Group will continue to push for the expansion of Gatwick airport for the benefit of the city and its residents.”

The Foreign Secretary Boris Johnson MP, a long-term critic of the Heathrow option had said in the past: “he would lie down in front of the bulldozers” to stop the expansion if Heathrow was chosen. He told reporters today that he did not think the new runway would ever get built because four surrounding Conservative local authorities opposed the plan.

Sadiq Khan, the Mayor of London who favoured the Gatwick option, also said the Government had made the wrong decision.

Sir Howard Davies, author of the Airports Commission report had recommended Heathrow as the best option and today said, Heathrow was the “only choice” for airport expansion.

The Greens say any airport expansion is damaging to the environment and communities, and will damage our tourist economy in Brighton.

Councillor Phélim Mac Cafferty, Convenor of the Green Group of Councillors, said: “The expansion of any airport – whether Heathrow or Gatwick promises to pollute our skies further, break our climate change promises and puts big businesses before communities and our environment.

“Standing in favour of airport growth, as the Labour administration has done locally, does not mean standing in favour of local businesses and communities. In fact, 60% of flights at Gatwick are leisure related to other parts of the UK  so expansion of the airport would only entice visitors away from spending money in our city which would negatively impact on our local tourist economy. Our city has seen a large drop in visitor numbers since Labour took power and we believe we should be spending our energy making the case for more visitors to come to the city.

“Further a myth is peddled about how airport expansion benefits those with least in society when ¾ of leisure travel is by the richest people in society and over half of the British population don’t fly at all. Only 15% of the population take 70% of the flights. Air travel has paid no tax for 70 years.

“Transport for London put the cost of expanding Heathrow to taxpayers at £15bn-£20bn to provide associated infrastructure and there is no question it would cost us at Gatwick too. On the one hand we are told that we have to tighten our belts but somehow there’s always the cash to throw at airports. Airport expansion happening at the same time as we have meltdown across public transport is madness. The fact that you can often fly cheaper than taking the train and anyone who has taken a train to or from Brighton and Hove recently knows we desperately need investment in public transport infrastructure.

“A healthy economy can only happen with a healthy environment so the protection of the environment in turn protects the economy. What good will any expanded airport be if we are too unwell to feel any benefits? The government is in court this week for failing to cut air pollution and any expansion of airports will only mean our air is more polluted as our climate change commitments go unachieved.

“It is a shame that for our government and locally, commitments to our environment are little more than lip service.”

In protest at the Governments decision Zac Goldsmith MP for Richmond Park and the unsuccessful Conservative candidate for London Mayor earlier this year, has resigned his seat. He has a majority of 23,000 and will stand as an Independent candidate. He said: “This project is almost certainly not going to be delivered. I believe this decision will be a millstone round this Governments neck for many, many years to come.”