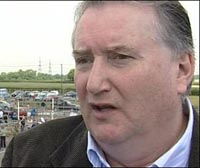 GMB General Secretary Paul Kenny will lead a march and demonstration of GBM members employed by Brighton & Hove City Council who will be striking over proposed cuts to their take home pay this Saturday, June 15.

The march will assemble at the Cityclean Depot on Upper Hollingdean Road, Brighton at 1130am and will take the following route:

• Turn left and down Queens Road to the Clock Tower,

• Left onto Grand Avenue to the front of Kings House.

GMB members employed by Brighton & Hove City Council are facing cuts to their take-home pay following Green Party and Conservative plans to alter their terms and conditions of employment.

At a meeting of Brighton’s Policy and Resources Committee on January, 24, 2013, Green and Conservative Councillors passed a measure which authorised Council officers to implement a “modernised pay and conditions package”. Labour Councillors voted against the proposals.

Subsequently, Council officers have been in negotiations over the proposals with the recognised trade unions. At a meeting on April 29, 2013 the Council made what they described as a “final offer” which still included pay cuts of up to £95 a week for some of the lowest paid staff.

As a result GMB launched an industrial action ballot, the result of which was announced on Friday,  June 7 with 95.6% voting in favour of strike action.