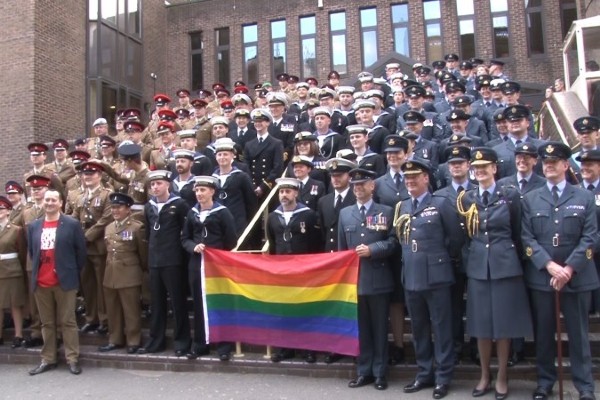 Following the announcement that LGBTQ+ veterans who were discharged from the forces due to their identity will now be able to reclaim medals, an gay ex-RAF member has said an official apology should be issued to those who were discriminated against. The medal scheme was recently set up by the UK Ministry of Defence (MoD) to correct ‘historical wrongs’, as prior to 2000, LGBTQ+ service personnel were removed from the forces if their sexuality or gender identity was made public.

However, one veteran believes this is not enough. 52-year-old David Bonney, who joined the RAF when he was 17, told Plymouth Live that service members were frequently spied on, and so he had to keep his brief relationship with a male red cross worker a secret. However he was then jailed and dismissed after a copy of Gay Times was found in his room. Bonney said: “I was in my early 20s and like anyone else in their early 20s, I was entitled to a sex life, to have relationships, just like anyone else in the military or in the civilian world. But that’s not how they saw it, because I was gay. I was fined for the financial issues, but I was jailed for six months for being gay.”

He said that LGBTQ+ veterans like himself deserve an official apology: “It’s taken more than 20 years to get to the stage where they realise they were wrong and it’s still not over. I have to go to them – to my bully – and ask for my medals back. Why the hell should I have to go back and ask for forgiveness about my sexuality, so that I can have my medals? I earned them. They should also send us all an apology, not just a government spokesperson, but the military chiefs. We’ve heard nothing from them.”

Carl Austin-Behan, another RAF veteran who now serves as LGBTQ+ advisor to the mayor of Manchester, recently discussed his experiences as a gay service member, telling the Manchester Evening News he was discharged from the forces for his sexuality in 1997. He said: “I had gone from a job which I was to have for 22 years to nothing within minutes. I lost my career, I was homeless, I lost my friends and I lost my pension.” He said LGBTQ+ veterans should be welcomed back into the forces: “Getting the medals back is a good first step but what I really hope is that it’s the start of a whole new beginning for LGBTQ+ veterans. It’s time they feel like they are welcomed back to the armed forces family.”