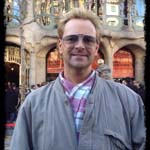 Gary Tucker, a Brighton scene regular for more than 20 years, was tragically killed after the car he was driving was struck by an ambulance en route to an emergency call on February 28.

Originally a dispensing optician, Gary then pursued a career in property, buying, renovating and renting flats in the Brighton area. He also ran the two seafront kiosks in Seaford for several years and it was his friendly, outgoing personality that helped transform them into local meeting places for the community.

At weekends he would be a regular face on the Brighton scene with weekly trips to the theatre; he was known by a great many people and could regularly be found in Betty La La’s entertaining friends.

“Gary was really funny with a great sense of humour. He was the type of person who would light up a room when he walked into it. He was so caring and kind and very loyal.”

All who knew him will sorely miss Gary’s colourful, witty personality and the loss is all the more painful due to the tragic circumstances in which he died.

He was devoted to his mum who said:

“He was a wonderful, loving, kind and caring person and the best son that anyone could ever wish for. Everyone who knew him will miss him dearly. He was my world and I cannot even contemplate a future without him.”

Gary was cremated on February 15, 2013 and a memorial event will be held in the near future.