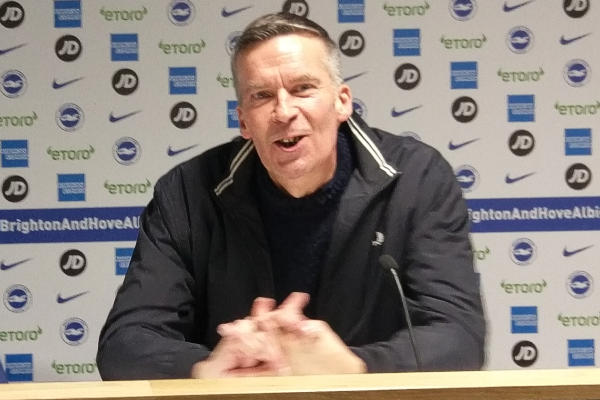 Giving Thanks for the Life of Jonathan Best

It was with the greatest of sadness that I heard of Jonathan’s passing. I met Jonathan when I applied for a role at Brighton and Hove City Council around 2004 and I have the strongest memory of him immediately taking me under his wing and steadying my nerves. I have no doubt that it was this kindness that helped me find much needed last minute confidence to secure the job and start a new career. Along with his incredible professionalism and passion for the Third Sector, it is this  extraordinary warmth and compassion that I remember the most from the 12 years or so I worked with Jonathan.

I was asked to write a piece about Jonathan to recognise his life and contribution to our communities and I reached out to a number of people and received so many wonderful reflections, all with the same themes running through them.  At the end of this article are the details of the Jonathan Best Fund which has been established by The Rainbow Fund to support young homeless LGBTQ+ people needing emergency accommodation.

Cllr Phélim Mac Cafferty, Leader of Brighton and Hove City Council on hearing of Jonathan’s passing wrote to me and said ‘on behalf of the entire city council I would like to mark our sadness at Jonathan Best’s death. Jonathan was an excellent council officer of many years, with huge experience, talent and compassion which he harnessed to enormous effect helping some of the city’s most marginalised communities and our incredibly valued and revered community and voluntary sector.  He is sorely missed and leaves our council worse off with his passing’.

Eric Page, the City Council’s LGBTQ Community Safety Coordinator, remembered Jonathan ‘as an avid racing and tennis fan who enjoyed a flutter on the horses, he was a keen photographer and closely observed nature when out walking’. Eric reflected, ‘He had the most wicked dry wit and was kind to a fault, very discreet about his generosity, and looked after his elderly family in the later years’. Eric recalled how Jonathan loved his high energy disco and Jonathan’s stories of his days as a bar boy,  ranging across the Manchester Queer scene in the late 80’s and 90’s and being behind the bar at the Black Horse in Brighton. On the other side Jonathan was a hard defender of inclusion, ‘he understood what it meant to be an outsider so always had time for people new to the city or from communities yet to establish themselves. His quiet championing of trans communities was typical of his ‘leave no one behind’ attitude’.

It is fair to say Jonathan dedicated much of his life to helping Brighton and Hove’s Third Sector thrive, perhaps most significantly through the administration of the council’s Community Grants Programme.

Donna Edmead worked with Jonathan for over 15 years on this grants programme and remembers Jonathan as ‘a kind and generous colleague who freely shared his knowledge and expertise’. ‘He was passionate about the sector and wanted groups to thrive. He loved being Grant’s Manager and described it as a perfect mix of words and numbers. He took calculated risks in championing the funding of new and emerging groups’. Donna also remembers his love of sport, in particular horse racing, and how he loved to study form and follow the jockeys and horses.  ‘Jonathan had a huge brain and was knowledgeable in many subjects.  He was as comfortable talking about archaeology as he was his passion for nature which came alive on many a team walk on the muddy downs’. Donna went on to say that she will miss him greatly and that she was proud to have known and worked with such a one off character.  ‘A kind colleague who fought to keep the council’s community grants programme when the rest of the country had lost theirs, the city owes him our gratitude.’

Councillor Leo Littman, Chair of  the Members Advisory Group (MAG) that oversees the Third Sector grant and commissioning schemes described Jonathan as a great servant to the city. ‘He was one of very few Council Officers whose name I knew before I became a Councillor, due to hearing it spoken with great enthusiasm by friends who had been involved with him in terms of helping them obtain funding for community events’. Councillor Les Hmailton also commented on how highly regarded Jonathan was in the voluntary sector and he was there. ‘He was very thorough and conscientious in all that he did. He was a great servant of the council and will be greatly missed by many’. Cllr Dee Simson, the third member of the advisory group, talked about how devastated the members of MAG were when they heard the news.  ‘Jonathan was an amazing officer and a lovely person. His commitment to the community and voluntary sector in the city was second to none. He knew every organisation, club and group and worked hard to ensure they all survived and were sustainable. He was, without a doubt, the most organised officer I’ve ever worked with. His passion for the city carried into those who worked around him and this will be his lasting legacy’.

Chris Gull Chair of the Rainbow Fund, talked of Jonathan’s ‘extensive knowledge of the bigger picture regarding need within the various communities, together with his knack of understanding the “politics” at play within and between those communities, meant that what funds there were to distribute as grants were thoughtfully, and strategically placed to produce the best outcomes. This was particularly true within the LGBTQ+ groups and projects in the city, who received not only grants, but guidance and support. He’s missed. Reflecting Jonathan’s contributions we feel the Jonathan Best Fund is a fitting tribute, helping young homeless LGBTQ+ people needing emergency accommodation’.

Jessica Sumner, CEO of Community Works talked of  Jonathan as the person many voluntary and community (VCSE) organisations went to for support. ‘He provided us with useful information and guidance and acted as a vital source of knowledge about the sector within the Council. Jonathan built up relationships with people from large and small VCSE organisations and helped many navigate through funding processes.  He supported them in identifying the best ways to make their ideas a reality. Losing Jonathan as a colleague has come as a shock to many in the VCSE sector and we will miss him. Our thoughts go out to his family, friends, and colleagues’.

Switchboard talked of the staff’s sadness at hearing of Jonathan’s passing. Like others, they remember Jonathan as a great supporter and advocate of the Third Sector and how they valued his honesty, candour and skilful advice.  ‘In 2019 Jonathan worked closely with us to submit a funding application to the government to bring a new wave of equalities funding into the City to enhance LGBTQ support.  Through this support Jonathan’s passion and commitment to community work was so apparent and he had an ability to be able to work within the bureaucracy of the council departments to get the best outcomes for the sector and ultimately the residents of Brighton and Hove.  Jonathan will be truly missed and his legacy will live on through those organisations that he supported – thank you Jonathan’.

AllSorts echoed many of these feelings, ‘Jonathan Best did so much good for so many people – dedicated to public service, driven by values and kindness, he took public responsibility seriously which made him entirely trustworthy and admirable.  He worked with us here at Allsorts Youth Project to ensure young LGBT+ people in the city had a place to go where they were supported and heard, without Jonathan’s support Allsorts wouldn’t be where it is today and for that we are forever grateful’.  Helen Jones from MindOut described Jonathan as an important part of the LGBTQ community.  ‘He was really helpful and supportive in the early days of setting up MindOut, especially when we became an independent charity 11 years ago; we have much to be grateful to him for.  We will miss him and send our condolences to his nearest and dearest’.

Sarah Tigh-Ford who worked closely with Jonathan on equalities at the Council for many years recalls him as ‘a generous, imaginative, unexpected, funny, eclectic, sensitive man’ and that his death is a huge loss to the council, the city and most of all to those of us who knew him. We laughed remembering his obsessive attention to detail that at times drove us potty but we knew made him brilliant at his job.  ‘I remember once interrupting him as he studied an excel spreadsheet. Jon explained (sketching the ideas with his hands, as he usually did) that he always first ‘absorbed’ the data, ‘feeling’ what picture it gave him. Then he did the maths and the analysis. The two always tallied, a beautiful combination of his intuitive and methodical instincts – which also served him well when betting on the horses… In a conversation with Jonathan you always learned something new… often unpredicted, not always the thing you had asked him, but frequently something that delighted him and allowed that sudden grin and laugh to flare out’.

It has been a privilege and delight gathering these memories together.

Dearest Jonathan, thank you for all you did, for the person you were and the example you set. You spent much of your life helping this extraordinary and blessed city to thrive and blossom. Thank you for everything.

May you rest in both peace and power.

Jonathan’s funeral took place on Monday 16th of August at Stockport Crematorium and the family have asked for donations to a charity in Jonathan’s memory.   The Jonathan Best Fund is a ring fenced fund that has been set up within The Brighton Rainbow Fund. The money within this fund will be available to homeless charities to draw on when they need to arrange emergency accommodation for young homeless LGBTQ+ people. This will allow them to be in a safe environment whilst longer term support is sorted out. Please help us to create this lasting legacy for Jonathan, helping those who desperately need help and support, exactly when they most need that help and support

We would invite you to donate if you are able to>

You can donate here.