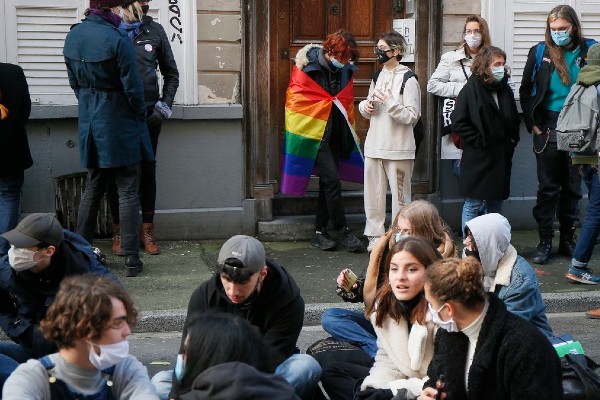 Over 100 students gathered in the entrances of Fenelon High School in Lille, France to pay tribute to a 17-year-old trans classmate, Fouad, who committed suicide. According to the Independent, Fouad had only recently come out as a trans woman, but was misgendered and criticised by school staff for wearing a skirt. She shared a video on social media where a member of staff argues her identity is ‘upsetting others in the school’, while Fouad is in tears.

She was found dead in a shelter where she was staying on Wednesday December 16 – only days after the incident at school. School authorities continued to misgender Fouad in a statement released after her death: “Valérie Cabuil, rector of the Lille Academy, learned with great sadness that a final year student at Lycée Fénelon in Lille ended his life in his foster home on Wednesday. This dramatic event shakes up the entire education community.”

A student at the gathering said: “We are here to send a message of tolerance…and to tell Fouad we are here for her”, with the hope to make a statement for trans rights in France. They also said Fouad “was suffering a deep pain that dates to a long time ago”. French education minister, Jean-Michel Blanquer, tweeted in response to the situation: “Fouad’s death challenges our society about everything we must do to ensure that everyone’s rights are respected.”