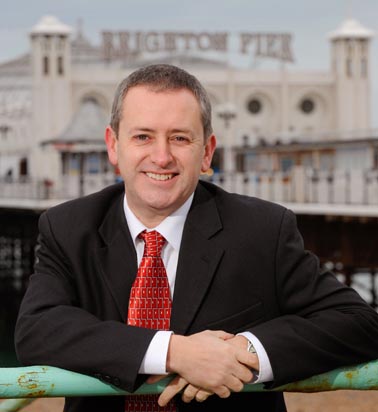 Simon Burgess, former Labour City Council Leader is, in a personal capacity, calling on the City Council to end the ability of a small number of March for England (MfE) protestors to disrupt the city and run up enormous policing bills.

The city was brought to a standstill on Sunday, April 21 by a small group of supporters of ‘March for England’ exercising their ‘right’ to bring their protest to Brighton & Hove to campaign for St Georges Day to be made a national bank holiday.

It is the sixth year MfE have marched in Brighton & Hove and each year more local residents come out to join the groups of anti fascist supporters opposing the presence of MfE in the city.

In 2012 the anti-fascists supporters headed up by Unite Against Fascism (UAF) were able to block the route of the marchers causing chaos in the city centre.

The main march went off with few incidents but there were reports of violent incidents throughout the city centre late into the evening as small groups of fascists and anti-fascists clashed with each other.

Sussex Police reported 19 arrests for offences ranging from affray to possession of an offensive weapon. More than 700 police officers from all over the country were drafted in to police the event with estimates of the cost coming into several hundred thousand pounds

“I was proud once again to stand shoulder to shoulder with our city’s diverse population to show the homophobic, transphobic and racist English Defence League and MfE that we don’t want their hate and prejudice here. The vast majority of people opposing their presence do so in a non-violent way but unfortunately violence takes place between some on both sides and there is a significant risk of innocent people being injured or abused not just at the march but over the whole weekend as evidenced by the extra Police presence during that whole time.

“I realise my call for a ban will cause concern but should we really put the right to come to our city to march above resident and visitor safety and our local economy? No, enough is enough. The MfE and EDL come here simply because they hate our diversity, almost none of them live here. In contrast local protesters, for whom this is often their first protest, outnumber them by a factor of ten to one proving the city wants none of their message of hate.

“If the council calls on the Police to implement a ban it will not shut down legitimate protest in this city. Barely any MfE marchers live in the city and both the level of threat to public safety and the disruption to local businesses is out of all proportion to the numbers coming here to march.”

“I believe that it is important to our democracy that we respect people’s right to free speech and peaceful demonstration, however abhorrent we find their views. I was pleased to see that a small number of racists who descended on the city were far outnumbered by rational people opposing bigotry.

“I do have genuine concerns about the impact of the march on tourism and local business, as well as the cost of security which is borne by residents of the city. That is why I think that in future a more appropriate location than the seafront may be found for the demonstration. I also spoke with the policing Minister last night to raise the possibility of additional funding from central Government to help cover the cost  of security.”

“Unfortunately our wonderful city has become a magnate for all kinds of protests. Given that Brighton & Hove has become the destination of choice – regardless of any actual link to the area – I believe that the Government should recognise that it is unfair that we should keep picking up the bill. While I will be talking to my ministerial colleagues about setting up a special discretionary fund to help pay for the operational cost of policing these kind of marches, I don’t think that many people would think that it stifles free speech to stop those who are clearly intent on violence and disruption from coming to Brighton & Hove.”